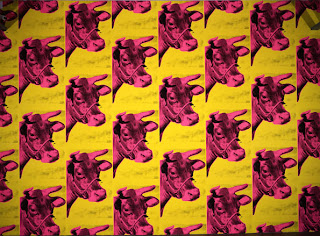 Few twentieth century artists have garnered such commercial popularity and critical respect as has Andy Warhol. In the Metropolitan Museum’s retrospective, Regarding Warhol: Sixty Artists, Fifty Years at the Metropolitan Museum of Art, Warhol’s visual authority is explored in a display of the influence that he may have had on both his contemporaries and artists decades since. Broken down into five major themes—Daily News, Portraiture, Queer Studies, Consuming Images and No Boundaries, the exhibit finds its strength not just in its content of Warhol’s own work, but in the way it showcases of other important artists of our time that perhaps haven’t gained similar recognition.

Exploring a darker side of Warhol that was often overlooked underneath fluorescent palettes and banal subject matter, the exhibit provided insight into how pop-art pieces, specifically of the ‘60s, functioned to bring attention toward issues of equality, freedom of speech and corporate abuse. Hans Haacke makes a strong showing with his oversized Helmsboro cigarettes. Warholian in his use of an everyday product to convey political or social propaganda, the carton was a protest to Senator Jesse Helms’ limiting the display of controversial art. With $600,000 accepted from Philip Morris to sponsor the Bill of Rights, Haacke superimposed Helms’ photo over the Marlboro logo to show the irony of the government promoting freedom of speech while at the same time suppressing creative expression.

The issue of Warhol’s ambiguous motivation in creating his famous Marilyns finds commonality in Jeff Koons’ ceramic Michael Jackson and Bubbles. Both commentaries on public perception and the pitfalls of celebrity, Turquoise Marilyn with her clownish aqua eye shadow and lipstick bleeding past the lines smoothly transitions towards Koons’ master and pet almost identical, dripping in gold and bearing the same red smile.  Bringing forth this concept of adoration versus mockery is one of the exhibit’s strengths. 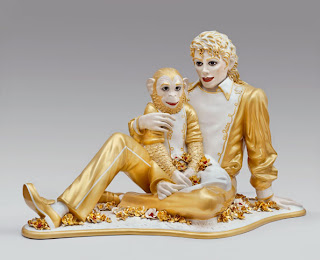 “I wanted everyday people, not superstars because that was what Andy was doing,” reads Chuck Close’s Philip Glass portrait label. But while some artists such as Chuck admit to being directly referencing Warhol, a big issue that comes into consciousness mid-exhibit is the designation of Warhol as the influencer versus the influenced. Alex Katz presents an interesting case in this thread of inquiry with his Lita portrait. With the socialite Lita Hornick depicted against a solid blue background, facial features diminished to flattened planes, the artist claims Warhol stole the latter’s signature portraiture style. With such significant players featured in Regarding Warhol, it does seem a little misleading to clump such a notable group of artists as followers rather than trendsetters themselves. 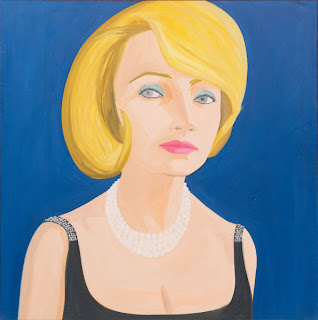 Beyond Warhol’s Campbell soup cans, multiple Jackies and color-blocked Maos, it is his 16mm films that gave visitors a better understanding of his motivations as an artist. His four-minute Screen Tests of significant players in the art scene and the eight-hour documentation of the Empire State Building from night to day brings forth the artist’s role as an observer and his obsessive interest in voyeurism. It was this constant drive to capture moments in time and his fascination with what lies beneath the surface that allowed his work to ultimately earn an immeasurable audience.

By the end of the exhibition, the viewer gets the feeling that perhaps some connections were too far stretched, such as screens playing episodes of MTV’s Real World and The Osbournes. Citing the artist’s desire to create his own “Nothing Special” television show, the allusion that he paved the way for reality television, while probably not entirely untrue in some regard, felt all together too forced.

Whether the exhibit convincingly relays its message of the Warhol influence on all of the work is up for debate, but while in the magenta and chartreuse lined walls bearing his famous Cow Wallpaper print, the biggest point to Warhol’s work becomes crystal clear. Bid goodbye by Lou Reed’s vocals, Silver Clouds floating aimlessly, one walks away with the realization that beyond the propaganda and social commentary, Warhol’s art was simply meant to be experienced.
Posted by Reggie Aquino at 10:18 AM