Mark Dion: "The Library for the Birds of New York," at Tanya Bonakdar Gallery 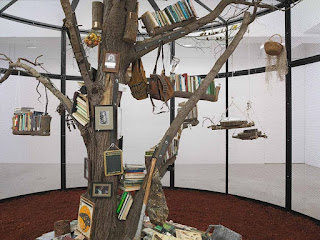 With New York in the final throes of winter, the chirping birds of The Library for the Birds of New York by Mark Dion infused winter-weary New Yorkers with an energy usually reserved for spring time. The birds, on the other hand, seemed non-plussed, going about their birdly business of drinking water, flying, and eating seeds with the busy vigor of the standard New York inhabitant. In this sense, the show switches roles: its the birds that rush around with purpose.

The aviary houses several books stacked and strewn about an 11 foot white oak tree in the center of the aviary. Each book is bird-related, from navigational texts, literary works on death and environmental degradation, to bird-watching books. This library, is, of course, absurd as not only can birds not read, but birds are familiar with these topics without ever needing it explained to them. Their understanding of environment is instinctually haptic, whether wind on feather, temperature on skin, or the atmospheric understanding that prompts migration. Only humans need libraries.

Bruno Latour defines modernity as the human belief in the separation between humans and nature. If anything, humanity has tried to assert itself on nature, rationalizing land into grids and even designing spaces for "natural preservation." Latour claims that we have never been modern, that humanity is a part of nature and interacts with ecologies largely the same as any other organism does. Birds have never developed a modern period that put their own existence above all others. Instead, they rely on a sensory understanding of their environment to stay grounded within it. Perhaps Dion, then, is doing humanity a favor by taking the library, a high achievement of modernism, and "throwing it to the birds."
Posted by Craig at 3:32 PM