I have always been drawn to an unfinished aesthetic in art. I enjoy the dance between tight detail and loose sketching, where the rawness of the material is exposed. Above all I am excited by how the design of the artist's creative process is unveiled. Naturally, when the Met Breuer announced its upcoming exhibit Unfinished: Thoughts Left Visible, I was eagerly anticipating it. Upon seeing the show, it was evident that no unfinished effort on behalf of the curation.

The show is displayed on two floors of the Met Breuer, arranged primarily in a chronological order, and incorporates works in all mediums. It was the works of Alice Neel, Lucian Freud, and Gustav Klimt that initially caught my attention in the Press Releases. However it was the old master figure paintings from artists both familiar and unfamiliar that truly struck me. Though the “unfinished” aesthetic or concept is prevalent in the contemporary art world, it is an idea that we do not commonly consider when dealing with classical works. It was a joy to see the production of “masterpieces” forever stopped in time, where some parts were rendered and others remained as suggestive sketches. In one painting by Anton Raphael Mengs titled, Portrait of Mariana de Silva y Sarmiento, duquesa de Huescar, all but the face of the duchess and the indistinct shape of a dog in her lap is flawlessly rendered. The face appears smudged and almost ghostly, whereas the outline of the dog was flat, as if it had been cut out from the painting. Had I not looked at the date (1775), I would have assumed that it was a painting inspired by the Dadaist movement, approximately 150 years later.

A beautiful dialogue between the older works and the contemporary pieces formed as I passed through each room, weaving together the works of Albrecht Dürer, Alice Neel, Ferdinand Hodler, Kerry James Marshall, Felix Gonzalez-Torres, and Louise Bourgeois. Through the juxtaposition of these works the word “unfinished” blossomed into a multitude of meanings, beautifully undressing the idea of what it is that makes a work of art. 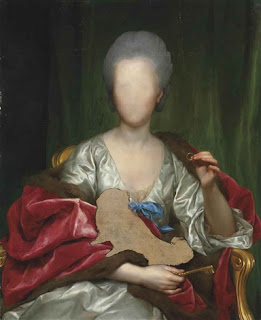