Continuing her multi-material practice, Rachel Harrison uses photography, sculpture, and cardboard to redefine the gallery space in MoMA. The photographic series was made in Perth Amboy, New Jersey, and these images display figures are standing behind the windows of a white house. Through their gestures, the figures are trying to gain attention from the outside world, or even asking for help. It feels that they are trapped in the house, and a bizarre, weird atmosphere is brought into the space. In the middle of the gallery, a photo of the sky is hung up. This image represents the goal that the people tend to reach. However, due to the obstacles made by cardboard within the space, the figures behind the window can do nothing but face the center of the room - the sky picture. 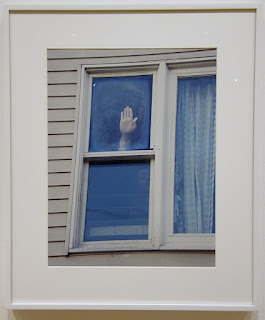 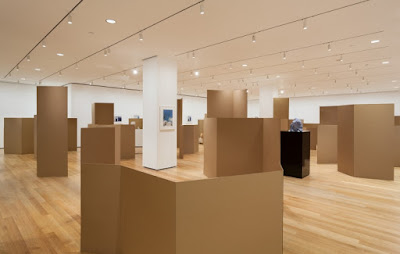 The cardboard makes the space into an awkward maze. In the space, several readymade sculptures are found. Those sculptures present cultural stereotypes, and they are located in different corners of the maze. If there is anyone who is willing to accept the challenge of the obstacles, the easily destroyable cardboard, the sculptures are revealed, and the connection will be built. However, since no one suspect the cardboard and all the resident choose to hide behind the window instead of taking physical actions, the blocks remain forever. This room is a neighborhood, but meanwhile, blind and dysfunctional.