Positive Pathways (+)
Adam McGowan
A recent visit to the The Mitchell-Innes & Nash gallery showcased the collective art pieces named  Positive Pathways (+).  The title of this exhibit sounds like an environmental conscious terraforming cult. My ephemeral response to the installation as a whole is a feeling of melancholy but with a mixture of adventure.  This feeling seemed to be brought about by the way the light interacted with the whitewashed walls and pillars. I noticed that I was drawn to the light; observing what that meant - maybe a religious association.
The exhibit consists of sculptures that were sculptural reliefs created using thermoforming which is a commonly used industrial process with thermoplastic sheets.  These sheets are heated and formed on a mold.  The reliefs are based on 3D renderings of stills taken from Youtube videos and images found online of religious practitioners promoting the positive energy healing such as meditative poses.  Most of the sculptures were a velvety red and white.  The rich color of a red velvet had definite religious overtones.  In addition, there was sand piled up on the corners and around the main sculpture.  In the addition to the reliefs, the main sculpture was a very impressive reinforced plaster of a woman performing a healing ritual to a child.  Framing the sculpture was an implied racing track with even more sand in the outer orbit.
The artwork was both visually and aesthetically pleasing, however the Healing aspect of the Quantum Touch Healing exercises felt to be a bit far fetched.  This did not take away the experience of feeling somewhat reverent because the artists’ intentions were to bring positive energy to heal the mind and body.  It was interesting to see that this new found “religion” is creating their own art similar to the Christians so long ago. 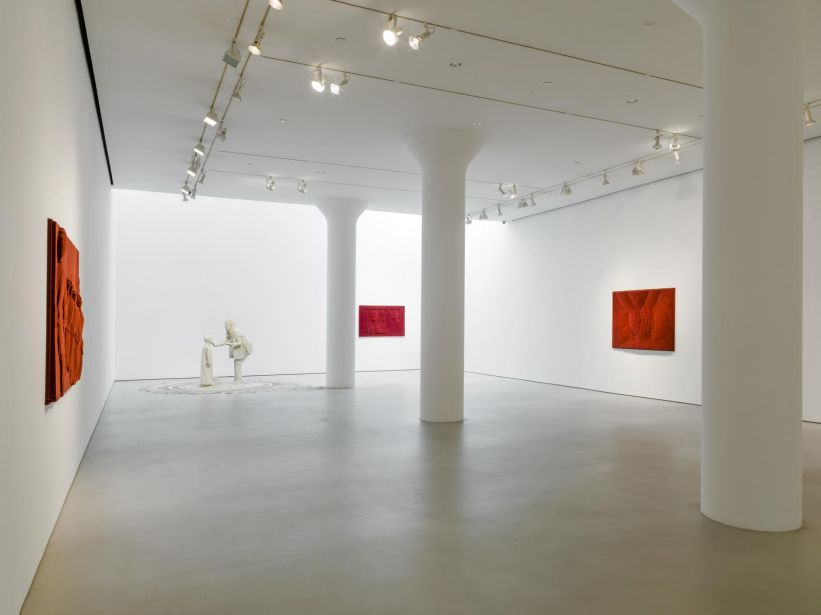