You are dancing under the spotlight, your shaky moves followed by hundreds of indifferent eyes. Reality fades as members of the audience begin to join you on stage. And poof. Suddenly, you are gone.

Alex Prager’s latest film inserts the viewer into a ballerina’s stage-fright episode on the opening night of her come-back show. The ten-minute short, commissioned by the Paris Opera Ballet, confronts the viewer’s expectations on performers by exposing the perspective of a dancer tormented by the demands of the audience.

Resembling movie stills, seven large-scale photographs hang on the white walls of the spacious first floor of the gallery. The film is screened upstairs in a dark room behind thick velvet curtains. From this floor, one can observe the people below, turning the gallery into a sort of inverse theater where the observed becomes the observer. As in the film, some of the photographs, like “Orchestra East, Section B”, show the distracted audience members, all dressed in 50’s costumes. The highly produced images have the cinematic sheen of a Hollywood melodrama. The rest of the photographs, like “Act III, Scene”, turn the camera around and portray the dramatically-lit figure of the ballerina dancing on-stage.

Prager’s “La Grande Sortie” is a carefully choreographed show that moves the audience out of their comfortable seats into a performer’s darkest nightmare. 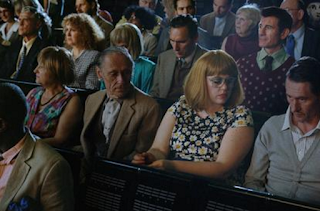 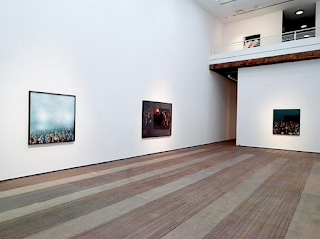