Cecily Brown: Rehearsal casts the spotlight on the artist's sketches, which hold their own as works of art. Over 80 pieces, ranging from small sketchbook scraps to huge studies, decorate the space. Upon entering, the overwhelming amount of pieces displayed creates an air of being within a sketchbook itself.

The drawings are completed in various media, including ink, watercolor, pastel, pencil, and more. A broad range of techniques are present in Brown’s works. The drawings have a transient quality to them, presenting as simultaneously finished and unfinished. The compositions tend to feature mostly empty space surrounding the sketch itself, giving a loose, carefree feel to the pieces.

The exhibition focuses on Brown’s many inspirations, such as the prints of William Hogarth, and how she goes about creating her own renditions of these works. Many of the pieces at first appear to be similar, but upon closer inspection the uniqueness of each iteration is evident. Slightly altered details and gestures in each drawing create a ripple effect that transforms the appearance of the entire work. 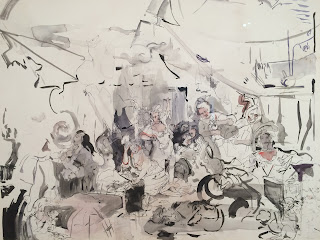