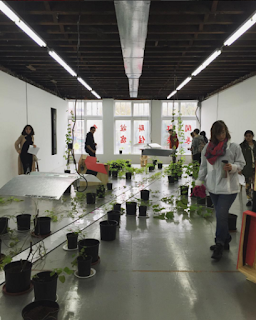 Although at first glance the plants in Reena Spaulings Fine Art might appear like ordinary house plants, on closer inspection they seem to be channeling something darker. For his solo show “Biscuits and Green Sox Maaike,” Shadi Habib Allah scattered two dozen or so black pots filled with invasive kudzu vines across the gallery space. A thin strip of touch-sensitive Fuji paper runs diagonally across the floor through the pots, lying ready to capture the movement of the vine (which Southern legend says grows at a rate of 60 mph). This rapid growth is also a part of the sound installation, though the audio was not playing during my visit.

Despite these props – the paper and the audio – the growing vines are the crux of the show. But installed as they are, they aren’t quite delivering the punch I might expect out of an invasive species that has choked and outcompeted many of the botanical species of the South. Images of these kudzu monocultures don’t totally register in the tame, airy, and somewhat static exhibition space. There is, instead, the feeling that this set-up is temporary, and any growth ultimately negligible. As I left, I couldn’t help but revert to my initial impression: that these were ultimately mere house plants, totally within my control.