Danh Vo: “Take My Breath Away” at The Guggenheim Museum

The Guggenheim Museum has the rare ability to imbue anything within its walls with a sense of beauty as one of the best gallery spaces in the world. Danish artist Danh Vo (b. 1975 Bà Rịa, Vietnam) reaps the benefits of this, due to the fact that his work is largely made of unaltered found objects. Although the work is not visually stimulating it does perplex the viewer enough to induce contemplation about the meaning of the work. That, or enough to cause one to read the descriptions which were usually integral to understand art.

The goal of the work does not seem to be focused deeply on beauty or perhaps the long played out beauty of ordinary objects. Danh Vo is more concerned with the history of the object and how he can re-contextualize it to illustrate a story about culture, identity, and politics. This causes his work to read more like artifacts in a history museum, and perhaps not coincidently, the objects used in them are often acquired from a similar source.

I was ready to enjoy the exhibition upon seeing a collection of tapestries he acquired from the Vatican as they showed a more sensitive eye for found objects than what I expected. However, I quickly realized that the concepts for all of the work was more or less the same and became formulaic. The artwork proved to be repetitive before experiencing half of the exhibit. This is not to say that the stories and concepts behind the work were not worth telling, but the artwork that Danh Vo assembled created the distinct feeling of having to do a chore through reading every wall text to truly experience his work. 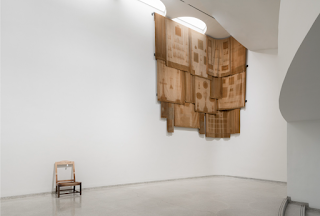