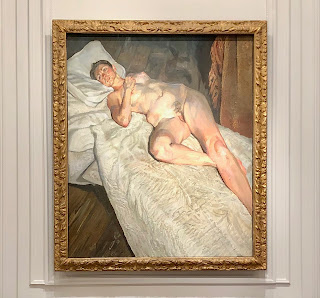 Lucian Freud: Monumental showcases Lucian Freud’s well known naked portraits. Freud is a figurative painter; inspired by the impressive physicality of performance artist Leigh Bowery, Freud began a series of works that emphasize the physical presence of models. For him, the portrait begins with his idea that for all human beings, the naked body is complete honesty.

Arguably, his handling of the surface of the paintings is one of the essential elements to savor in his works. The thick brushstrokes emphasize the intensity of the subject, which encourages the viewer to focus on observing the subject immediately rather than the external judgment. The weight derived from this application of paints organizes and balances the tension of the whole painting. In other words, the rough and thick texture of his brushstrokes is not like a traditional Renaissance painting’s embodiment of figure as a seamless surface, but his work exposed the figure itself as a powerful being that pulls the physicality of the figure to confront the viewer. Furthermore, confronting the figure by physical application of paint with the spectrum of colors between the cold tone of colors on shadow part of bodies and warm tone of colors on the bright part of figures brings the subject matter plainly that causes the sense of honesty of bodies that Freud intentionally wanted to evoke.

Except in some of the paintings of closed-eye figures, the people in his paintings are staring straight of the viewer with serious, seemingly intimidating look. The expression of gazing of these figures existing between strange beauty and unattractiveness, almost seems like visual aggression, even give the uncomfortable feelings to the viewer. These are his devices to emphasize the existence of the figure itself, not the creation of aesthetic value through the beautification. Notably, his consistency of translating his immediate perceptions of figures onto the canvas without the beautification of body, cause the portraits that are complete honesty as the figure is.