So Much Deathless at Red Bull Arts New York


“So Much Deathless” at Red Bull Arts is a retrospective of the work of Gretchen Bender (1951 - 2004). Bender was a multi-disciplinary artist who worked heavily in video, particularly by repurposing TV programming as well as live tv broadcasts.
Bender’s work Aggressive Witness - Active Participant, 1990, is composed of 12 older model televisions, placed about four feet off the ground against the walls, wrapping around the viewer in a dimly lit room. Some of the screens play period abstract computer graphics while others play live television shows and commercials.
Upon closer inspection, the broadcasts displayed are contemporary television shows and ads. Centered on each screen in vinyl letters are one to two word statements such as “NO CRITICISM” or “NUCLEAR WARHEADS”.
These phrases overlaid on top of antiquated looking television sets would seem like social commentary by the artist on the culture and climate of the time the work was created. Instead, experiencing the overlay of phrases such as “IMAGE WORLD” AND “HOMELESS” over present day commercial content reflects on the meaning these social commentaries have today and how their relevance is as true now as it was when the work was created nearly 30 years ago.
The presentation on the older CRT monitors reminds the viewer that the moving image/media’s role and power in our society is nothing new and has long been problematic in its sway of the general public’s opinion and attention. The viewer is confronted with phrases that inspire thought and hopefully discussion over social and political issues such as homelessness and the potential for nuclear war but is made to consider these topics with the backdrop of a toothpaste commercial or America’s Got Talent. These issues are just as real today as they were 30 years ago and Bender helps the viewer consider whether one would prefer to spend time watching the next episode of a sitcom or researching and debating long standing and evolving socio-political issues. 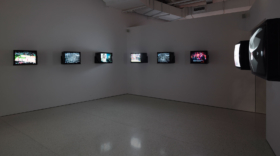 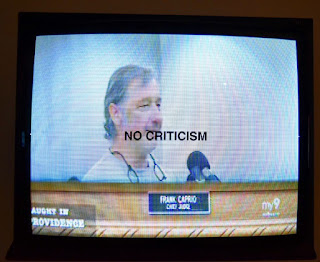