Programmed at the Whitney

The Whitney’s Programmed is an exhibition of instruction-based/procedural and digital work split into two sections, one of which focuses on conceptual art. Within this, there is a conversation that takes place between work by Sol LeWitt and Casey Reas. LeWitt and Reas create pieces that are interpreted and recreated to look different each time, but one is analog and the other digital. They both explore how the concept behind the work is the art itself, while the physical or digital creation can be automated or outsourced.

LeWitt’s Wall Drawing #289, 1976, uses a list of instructions performed by others who execute them in order to produce the work that is exhibited. The resulting graphic work is a series of white lines on a black background. Reas’ {Software} Structure #003 A, 2004 and 2016, creates a digital, animated series of monochromatic lines and dots responding to various rules in the coding of its program in Processing. These works were created and conceived by different people, decades apart, and in very different media.

LeWitt’s background is black while Reyes’ is white. LeWitt’s line’s points of origin are focused and static while Reyes’ are variable and moving. These two pieces are complementary and as they are both recreated over and over again they will continue to have a dance of changing forms while being conceptual siblings. 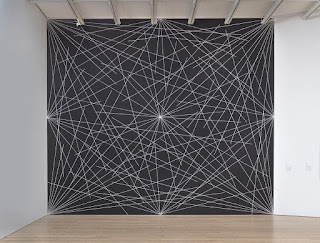 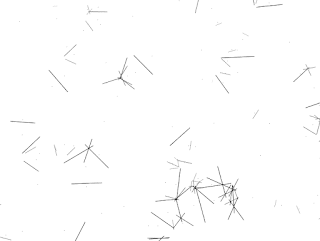