The Stephen Hawking like computer generated “singing” emanating from Alexei Shulgin’s 386 DXI, is the first thing you notice walking into The Art Happens Here: Net Art’s Archival Poetics at the New Museum. The show, presented by Rhizome, is a showcase of net art from the past two and half decades.

386 DXI, declared the “first ever cyberpunk band,” consists of a 1990’s PC and two computer speakers on a wooden shipping pallet taking shade under a rainbow umbrella, and a small coffee cup stuffed with a few dollars in front.  Green text scrolls left to right across the screen asking the viewer “SPARE SOME CHANGE FOR A POOR COMPUTER!”.

The power of the piece comes from its ability to engender both empathy and bemusement.  The unidentified song being recited in the text-to-speak robotic voice has the rhythm of a sea shanty or old timey ballad, but somehow feels sadder. Located on the ground in the corner of the gallery the bulky busking outdated tech is positioned like a homeless person or gutter punk.  The absurdity of the computer positioning itself as human by asking for “spare change” while acknowledging its own object-hood as a machine, forms a perverse joke about late capitalism. ‘If robots replace human workers, leading to unemployment and poverty, what happens when those robots are replaced by their upgrades’? 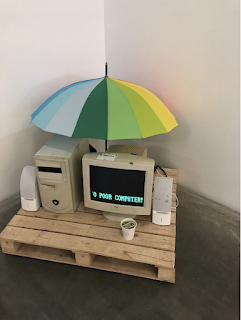 Posted by Philip LaVelle at 1:50 PM