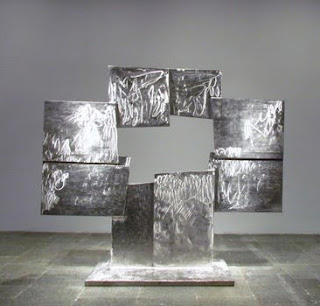 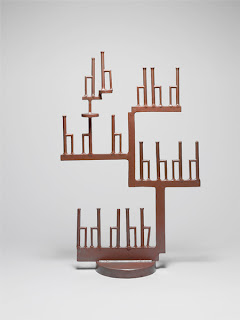 The Whitney Museum of American Art in New York City is showing a retrospective of abstract expressionist David Smith (1906-1965) called “Cubes and Anarchy.” The exhibit covers a 33-year period, from the 1930’s to the mid 1960's, the last decade of his work. The show displays his three rarely seen sketchbooks, a variety of paintings, eleven early photographs, and over sixty sculptures. Throughout his career, David Smith created his pieces by means of basic geometric forms, which were constructed to reveal abstract compositions. He is considered one of the greatest American sculptors of his generation, He utilized industrial materials to construct iconic works. His choice of materials was heavily influenced by his job in the automobile industry. Although he was trained as a painter at the Art Students League in 1927, it is unclear whether his works are spatialized paintings or painted sculptures. As he states: "In my own case, I don’t know whether I make some pieces as painted sculpture or paintings in form."

Stepping out of the elevator in the fourth-floor gallery, you come face to face with the abstract piece named Untitled (Candida), 1965. One of the last works that Smith completed, this piece was named after his daughter, Candida; it is a central, stainless steel sculpture comparable to an abstract person opening her arms as if to give you a welcome warm hug. It was created by combining eight irregular-sized sliver plates, cut into rectangles and squares, arranged to overlap on certain edges, welded together at the sides and heightened on a low base. It resembles a giant three-dimensional collage cutout in the center. An interesting characteristic of this piece is that it looks incredibly heavy from the front but appears thin and weightless when viewed from the side. Moreover, the steel surface has textual burnished elements that reflect and absorb the surrounding light to add a pristine polished effect to the steel.

The exhibition begins with two amazing collections from the Cubis and Circle series. These particular collections from the 1960's present sculptures using burnished and painted stainless steel formed in geometric styles. In the first area, there are five large sculptures spread in the space. Behind the only colored sculpture, Circle III, 1962, hang three small paintings that are barely noticeable. The Circle III sculpture is made of painted steel, created from a concept driven by Smith’s “drawing in space.” It contains his main practice elements of scale and color divided in three parts: a white thin base, an orange full circle, and a green semicircle that gives the impression of a horn.

Smith's work in the exhibition is arranged as smaller galleries within a large one. The show flows in a patterned, chronological order. The east section concentrates on his works from the 1930’s through the 1940’s. This room displays four paintings on the walls and three welded metal sculptures in the middle. Smith's artwork relied on aesthetics of Cubism that were inspired by 20th century modern artists such as Picasso and Julio Gonzales. I find Blue Construction, 1938, particularly striking with its unique deep blue color that dissolves to black in certain regions of the piece. Using different shape forms such as angles, circles and cubes welded with each other, the entire composition elegantly expresses a kinetic energy, largely through the use of angles and lines floating in space, in spite of the large, heavy base anchoring the piece.

The experimental photograph collection from the early 1930’s is located in a separate room. Smith’s black and white photographs document the artist’s vision for his sculptures to be presented outdoors. Using natural lighting and low vantage points, Smith is able to emphasize and exaggerate the scale of his sculptures. He also creates interesting photomontages that reflect industrial aesthetics by combining close-up shots of the docks and a ship’s deck.

Walking to the end of the room, you find yourself in the third section that exhibits three rare sketchbooks covering a great deal of brainstorming and concepts from 1933 to 1954. The pages of each sketchbook are marked with pencil and pen, and one sketchbook shows notations written by Smith in 1951, indicating the artist’s stream-of-consciousness at the time. At the very end of the space stands a highly interesting two-dimensional piece called 17 H’s, 1950. Once again adhering to his guiding concept “drawing in space”, Smith creates the painted steel piece by using 17 letter H’s. A sculpture that is abstract and resembles the unreadable language of a musical note can also be seen as a configuration of little chairs organized in different levels.

The Tanktotem series is the last collection shown in the exhibition made in the 1950’s. The sculptures look like standing human figures guarding the area. The Hero, 1951 is one of the sculptures created in painted steel that displays a disproportionately large head.

The exhibition is organized with ample space between sculptures, encouraging the viewer to absorb the magnitude that each conveys. Visitors have the privilege to examine the welded steel and the simplified geometric forms from 360 degrees and to experience the scale of his works firsthand. David Smith’s almost unparalleled ability to control and manipulate steel is displayed beautifully in the pieces contained in this exhibit. There have been many major exhibitions around the world honoring this talented artist of Geometric abstraction. The Whitney Museum has frequently shown David Smith’s collection, giving the public access to study and admire his unique geometric art form.