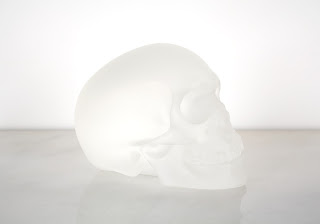 My first inclination after reading the text accompanying Sherrie Levine’s exhibition entitled “Mayhem” at the Whitney Museum of American Art, was to disregard it. I felt that the goal of the curators is to convey to the viewer that the artist’s point is to honor the masters who came before her. This idea seems to puts the wrong context around the work. Levine’s work is less about exalting previous artists and more about asking the viewer to question the validity of that art. By appropriating or reinterpreting master’s works, Levine pushes the boundaries of art in an almost comical way. She reexamines pieces that are influential and interprets them in ways that make the viewing of them seem humorous. Levine gleans ideas from the master’s works in small snippets and creates pieces which push the boundaries of the viewers thought process on what art can be. Levine is known for appropriation and the critique of authorship in art. In this exhibition the pieces included asks the viewer a series of questions; Is this art? What makes this art? Who’s art is it? By asking these questions and several others the artist challenges the accepted system of art and proposes that viewers open their minds to the possibilities of art.
The exhibition is arranged in five rooms each containing several replications of works by well known, influential, and recognizable artists. The artists include Marcel Duchamp, Walker Evans, Gustave Courbet, Man Ray as well as others. Each room contains a variety of works by these artists and are created in an array of media.

The first piece you encounter when entering the exhibition space is a series entitled “After Walker Evans”. Levine has rephotographed photos taken by the artist Walker Evans, during the Depression era and displayed them in such a way that when encountering them all together a moire or interference pattern becomes visible. The photographs blending together when viewed as one piece calls into question the importance of the individual works.

Settled next to this series is a piece entitled “Fountain (After Marcel Duchamp)” Levine replicates the infamous Duchamp readymade “Fountain” but has cast this version in bronze. Levine’s version of the readymade molds Duchamp’s gesture of appropriating an everyday object with the materials of a colleague Constantin Brancusi. By merging the two, Levine’s piece is paying homage to the lineage of the masters but also calling into question authorship and what makes an artwork belong to a specific artist, if that work can be replicated by another.

Levine has a knack for choosing a particular piece from an important artist and recreating that piece in such a way that makes the work unique. For example, in the second gallery twelve eerily lit skulls are placed in wood and glass panelled boxes in the center of the room. The artist is responding to the European still life tradition in which artists used skulls to depict the presence of death. Levine begins to pokes fun at this concept by placing the skulls in repetition so that the gallery has become a place where one could come gather supplies in order to create a still life, as if the skulls were an everyday commonplace object. The repetition of the skulls places the context of vanitas, or the presence of death, as inconsequential.

In the piece “La Fortune” after a surrealist painting by Man Ray, Levine has reworked the other artist imagery of a two dimensional surface into a three dimensional, functional object. In Levine’s version four, three dimensional, life size billiard tables occupy almost the entire space of the middle gallery. When entering this space I felt dwarfed by the presence of the tables. There are fairly wide rows between each table but the colors and materials used have an ominous feel to them. Levine blurs the line between the reality of an actual pool hall and a minimalist sculptural installation. Out of the context of the gallery the works would be likened to nothing more than pool tables used in a familiar pastime. Which calls into question the idea of the importance of the gallery space or context in which art is seen.

Overall the exhibition was enlightening and the questions the artist wanted to convey through her work were apparent. It was also exciting to have the opportunity to guess who each work was created to signify. What I found confusing is that the curators of the exhibition, seem to have interpreted, at least in my opinion, the ideas behind Levine’s work in a way that is inconsistent with what the work is actually about. Maybe it is presumptuous to assume that what I interpreted the works to be is more correct than the way in which the curators have interpreted it, but I did not understand the work in the way that the curators seem to have expected. What I undesrstood from the exhibition was something different than what was outlined in the texts accompanying the work. Instead of honoring the masters who came before, Levine’s work probed the viewers with questions about why we exalt certain artists, or aspects of art. The artists works stand for themselves and make statements without the need of texts to accompany them. The exhibition clearly ask viewers to challenge themselves when assuming that a piece of art is valid just because it was made by someone who is highly regarded in the art world.