Real/Surreal at the Whitney Museum of Art 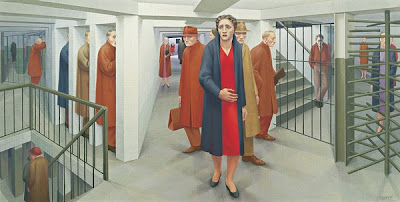 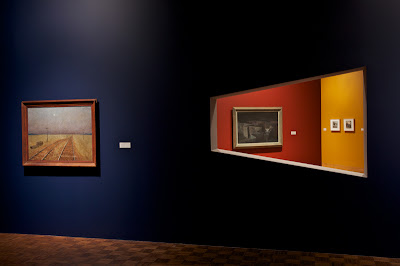 Real/Surreal explores the convergence of the literal and the psychological as it exists in 20th century realist and surrealist painting, drawing, and printmaking. Whitney curator Carter Foster’s arrangement is thought-provoking and deliberate; his selection meticulous and pitch-perfect, even with the initially brow-raising absence of big-name Surrealists like Salvador Dali, Rene Magritte, or Frida Kahlo. What I find to be most striking and unexpected, however, is that walking through the Real/Surreal show at the Whitney is like being in a dream about walking through the Real/Surreal show at the Whitney, due in large part to the incredible likeness of the transformed space to the iconic surrealist landscapes of the artworks it was designed to frame.

Upon entering the 2nd floor gallery of the museum, we as viewers are confronted with options regarding where we wish to begin our journey. Devoid of a preordained sequential trajectory, the layout of the show ingeniously exemplifies the surrealist practice of geographical automatism, wherein a person wanders from place to place, led only by their unconscious instinct. The design employs this branch of automatism but confines it to the closed gallery, with the artworks standing in for architectural landmarks, quietly lending an interactive element to the would-be conventionality of the spectator experience. Divided by a wall, the space becomes two separate environments interacting with each other through an asymmetrically quadrilateral opening cut in the dividing wall at eye level, the level of the rest of the works. Its placement suggests that the hole is to be viewed as an artwork, prompting visitors to consider the entire space with the same regard that they would give to any of the pieces. The hole, in framing the mundane real life action taking place in the adjacent room, references the surrealist perception of painting as a window into the unconscious, or, as in the realist works, functioning as an unsettling (and often voyeuristic) view of reality. It allows visual access to another alternate reality or universe, a common theme in such works as Henry Koerner’s “Mirror of Life” (1946), which contains several disconnected realities that appear simultaneously.

The introductory wall text is as conclusive as it can be, given the many facets of both movements. The text is located on the right wall, facing George Tooker’s “The Subway” (1950), a nightmarish rendition of a frightened woman in a subway station, composed with a startlingly diagrammatical use of 3-point perspective. Lurking behind the woman, who is positioned in the centered foreground, are coated male figures, ominous and threatening. The exaggerated 3-point perspective enhances the unreality of the scene as well as the unsure-ness: Are these men really threatening, or is she paranoid? These figures poke out from behind the woman and from booth-like structures along the left-hand side of the painting as they recede into space. “The Subway” seems to strike a perfect balance of the real and surreal: It is paranoid and uncertain, like a dream, yet there is no fantastical imagery; everything is recognizable, from the setting to the figures. It seems no wonder, then, that this piece, frontally visible from, and in close proximity to the entrance of the gallery, is the first piece we see when we enter and the last piece we see when we leave, as well as the show’s promotional image.

Though the quadrilateral window is the most obvious physical reference to a surreal atmosphere, one architectural element worthy of such consideration is the presence of two multi-planar, monolithic structures breaking up the space in the front room, significantly evocative of the looming, often ambiguous edifices that haunt many of the exhibition’s paintings, such as the rows of buildings in Kay Sage’s “No Passing” (1954), the shadowed structure in the upper right of Edward Hopper’s “Early Sunday Morning” (1930), and the ambiguous cubed wall in Federico Castellon’s “The Dark Figure” (1938). The multi-sidedness of the structures primarily functions as wall space on which to hang works but also elicits a comparison to the confusion and exaggeration of planar space in pieces such as Man Ray's "La Fortune" (1938).

Even when Real/Surreal is milling with guests, one can wander the show with the same disconnected feeling of wandering any of the dreamscapes it showcases, a feeling emphasized by the open space of the front room, interrupted materially by the edifices, but also optically by the spotlighting illuminating not only the works but the visitors as they float in and out of the contained pools of light, creating the impression of physical and mental detachment. This alienating psychological landscape is a distinctive characteristic of real/surrealist depiction. It is present in Robert Vickrey’s “The Labyrinth” (1951), in which a lone nun engages with her reflection from within a monochromatic maze; it is felt in Tooker’s “The Subway,” in which, despite being in the company of other travellers, a woman is anxious and paranoid; and it is particularly evident in Jared French’s “State Park” (1946), in which a family lounges under an umbrella, each gazing outward, disengaged from each other. All of these characters exist in some form of isolation, speaking to the attempts of the surrealists to make the movement universal by appealing to the collective psyche, connecting with the individual by presenting familiar psychological scenarios. The resulting unnerving mental state is one felt by the viewer not in the typical vicarious fashion inherent in the act of looking at and reacting to the art, but, thanks to the brilliance of the Real/Surreal exhibition design, first hand.