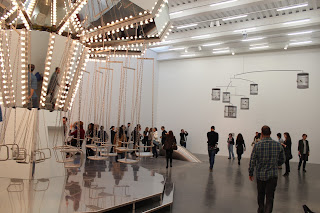 My hopes for Carsten Holler’s Experience at the New Museum were unusually high. While researching the exhibition I had imagined swirling around on the Mirror Carousel (2005), and gliding down the Untitiled (Slide) (2011). I also felt a titillating excitement when I thought about getting into the Giant Psycho Tank (1999) with others; clothes optional. Unfortunately, my visit did not live up to my grand expectations.

As I entered the lobby I was confronted by a series of lines reminiscent of the wait for Splash Mountain at Disneyland. At the end of these waits were two lengthy waivers: one for the use of Holler’s upside-down glasses and the other that outlined instructions for the “rides.” I skipped the line for the glasses and signed the other mandatory waiver. I was then ready for my “experience.”

I ventured up to the fourth floor in excitement for my descent on the slide, only to be faced with an even bigger line. Frustrated and annoyed I decided to hop on the Mirror Carousel, a swing ride and carousel hybrid, first to bide some time. After a minute or so I got off feeling unsatisfied due to it’s unbearably slow speed thinking maybe I had set my expectations too high.

I still had hope for the slide so I waited for my drop through the gallery to the second floor. I admit I felt uneasy as I stood and watched others enter the mouth of the metal structure. Sometimes the slide-goers would let out a scream that echoed throughout the museum that often resulted in laughter. I was then ready for the plunge.

I zoomed through to the bottom in a couple of seconds. Again, disappointment set in. Was this Holler’s intention? The rest of my experience was less than satisfactory. I was only inclined to go into the Experience Corridor, four rooms adorned with self-experiments, to escape the flickering Double Light Corner, a wall-mounted light installation sure to induce epileptic seizures, which plagued the second floor. After sniffing the “love drug” that warned of amorous feelings after inhaling, I made my way up to the third floor.

While witnessing another lengthy line for the Giant Psycho Tank, I decided to call it a day. At the end of my visit I felt disheartened and strangely disoriented. I think the most enjoyable part of my “experience” was knowing I hadn’t waited for those silly upside-down glasses.
Posted by macey foronda. at 8:43 PM