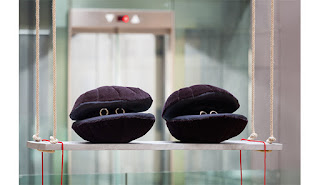 Cosima von Bonin’s “Who’s Exploiting Who in the Deep Sea?” reveals an assortment of delightfully colorful tableaus connected by an ocean theme. The artist’s first museum show in New York is full of larger-than-life sea creatures sewn from bright textiles and installed among various pieces of furniture and beachside scenes. A stuffed shark, made out of beige cotton, sits at a wooden desk that’s rather too small for its droopy body; a vivid octopus, sewn out of a dozen or so solid and patterned textiles spreads its tentacles across a patchwork stage; and a richly textured vermillion hermit crab lies flaccid across a white table base. There are also scallops, starfish, coral, and an over-sized white bikini.

Ms. von Bonin’s aquatic creatures are enticing and approachable, but hardly childish. Their careful placement among various objects puts forward a complex narrative that offers more than lighthearted child’s play. The aforementioned beige shark, for example, suggests the exhaustion or tedium of corporate life. Its eyes appear to stare up at the ceiling while its fins reach forward in seeming fatigue or exasperation. The difference between the scenes of beach life and the scenes from the inner sea further complicate the narrative. There seems to be a distinction in tone, for example, between the sunny playfulness of the lifeguard stand and the creatures that thrive in the dark depths of the sea. If there’s a metaphor here, it’s that these differences probe at the contradictions you might find in anything.

The show imparts the strange sensation that all of these creatures have been marooned in some way; plucked out of their natural environments, and posed as if taxidermied for our enjoyment. This feels a little at odds with the sound of crashing waves playing in the background, and to good effect: despite all the props, we’re certainly not at the beach. Despite the vibrant accessibility of the exhibition’s scenes, von Bonin reminds us that what seems familiar might ultimately remain unknown to us.