“Who's Exploiting Who in the Deep Sea?” Cosima von Bonin at The Sculpture Center

Oppression. Abuse. Profiteering. Those are some of the words that come to mind when reading the title of Cosima von Bonin’s first solo show in NYC. But inside the exhibition is an array of ludicrous sculptures, such as a stuffed animal shark sitting on a desk and a giant bikini hanging on the wall. The marine-themed pieces cover fifteen years of Bonin’s work and take over the first floor of the Sculpture Center.
The protagonists of the show are a series of stuffed animals arranged in nonsensical scenarios. “Total Produce (Morality)” consists of a crazy-eyed, large octopus laying over a rug. The artist used over a dozen fabrics to produce this piece, including floral patterns and neon-printed flags. A hermit crab ("The Bonin/Oswald Empire") faces a pair of microphones as if to give a news conference. Its floppy limbs fall over the life-guard chair it’s on, giving the creature a cadaverous look. These handmade pieces share the exhibit with readymade sculptures of beachy objects, like changing cabins and food trucks. A series of speakers that emit the sound of ocean waves combined with white noise are also scattered across the exhibit.
So who is exploiting who in the deep sea? The apparently serious question doesn’t seem to find an answer among the playful artworks of Cosima von Bonin. 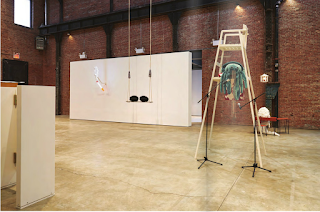 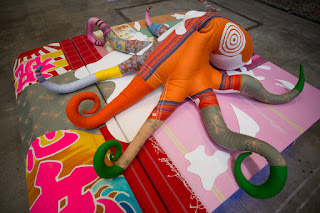