“Thunderbird” by Christine Rebet at Bureau 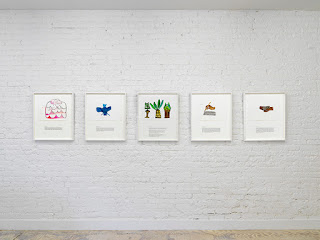 The exhibition of Christine Rebet is built upon the story of Sumerian ruler Gudea, who received a divine vision from the gods in his dream inspiring him to construct a temple. Archaeologists spent decades excavating this site in Iraq from the late 19th century to the early 20th century, and found numerous important monuments of Sumerian art and architecture. Currently, this archaeological site is the fieldwork venue for the British Museum's “Iraq Scheme” led by archaeologist Dr. Sebastine Rey. Dr. Ray and Rebet worked together to transform the archaeological researches from the original symbolic content of the temple to the story “Thunderbird”. The title “Thunderbird” is named after the avatar of the god Ningirsu, which is used as a metaphor by the artist to thread the ancient myth of Gudea, her appreciation to the archaeologists research, and the theme of the exhibition together.


The artist interprets the story through different formats, including animation, film, ink, drawing and painting. In the entrance of the gallery, several ink drawings with descriptions are displayed. Each of them illustrates a symbolic pattern found in the temple rendered in the artist’s unique romantic style. Loose line drawings and subtle ink colors seems premature, but they give the each painting emotions and life. Every single touch from the artist is telling a different story through the seems imperfect lines. The intuitive poetic practice of using colorful inks soaked into the paper and the unpretending simple line frames introduce the viewer to the aged myth of King Gudea.


At the center of the exhibition is a five-minute animation which imagines the conversation between King Gudea and Nanshe, goddess of prophecy, who helped the King interpret his dream. Every single scene in this Animation served as an individual painting by itself and display in the gallery. Also interestingly, the video is wrapped up by the close up of the hands of archaeologist Dr. Rey, exposing the relief image of the Ningirsu’s avatar, Thunderbird. in this way, the artist shows admiration towards the decades of labor by numerous archaeologists on this particular site, and leave viewers to fantasize their own version of the Thunderbird story.
Posted by Unknown at 5:59 PM