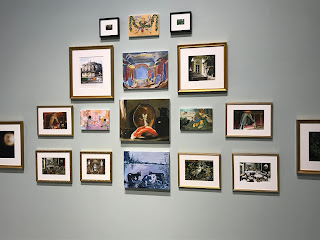 Karen Kilimnik’s solo exhibition first reads as an unironically giddy shrine to the romantic sublime of European culture. Small paintings and photographs are stacked salon-style on the walls. Idyllic images of English landscapes, herds of cows, and luxurious mansions are bedazzled with glitter and rhinestones. Video footage of a ballet and World War II troops play on screens. Rhinestones are crudely hot glued to miniature models of world-famous landmarks, such as the Louvre and the Eiffel Tower, intensifying the sickening feeling you are in someone’s naively reverential, fantasy world. Thankfully, if you look long enough, you will find that world infiltrated by nuggets of irony, hiding in the clutter. 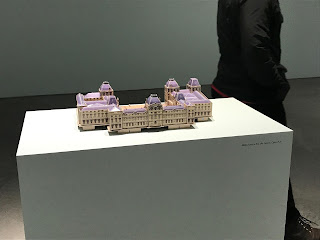 The first hint of subversion is found in the titles, which are casually written in all lowercase. While most are innocuous, such as “the pretty sheep in the golden english afternoon sunlight,” others are a bit odd, such as “thank you, i’m rested, i’m ready for my dinner now.” The latter conveys the sentiments of a cat whose image has been pasted onto an image of a Renaissance-era bed worthy of royalty. Many similar collages with strange titles have been quietly slipped in among the paintings and photographs. All of them are silly, and most of them portray cats in slightly surreal situations. In “secret meeting of the generals - onward!” five cats sit on chairs in a lavishly-decorated room. This ridiculousness suddenly permeates everything in the room, revealing that the miniature Louvre is just a store-bought 3-D puzzle, the rhinestones are actually Swarovski crystals, those sweet little paintings are made quite casually, and many of the photographs are of humorous subjects, such as urinating sheep. While the work still feels optimistic, it reads less saccharine, more playful, and a bit more critical of the social divisions between high and low art. 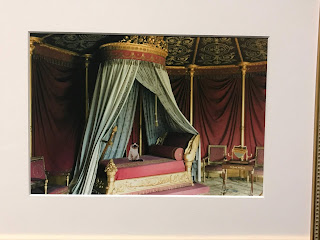