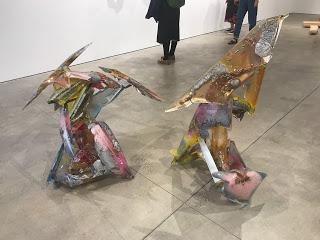 From afar, Richard Van Buren’s fantastically futuristic sculptures look like they have been frozen mid-transformation between bird and machine. While shiny and robotic, each abstract tangle is reminiscent of limbs, wings, and beaks, twisting and jutting out in unexpected angles. Floor works such as Dervish I (2019) take on the shape of a large bird of prey, about to take flight at any moment. This impact is further heightened by the magnificent lighting scheme, which is especially exquisite on the wall pieces, such as Silver Lining (2019), a piece consisting of five separate forms spaced evenly on a wall. Lit from at least four different directions, each static form casts multiple shadows, which are surprisingly arresting as they layer over each other to create delightfully unexpected shapes. This bolsters the illusion that they are rotating or flying around in a flurry of energy. 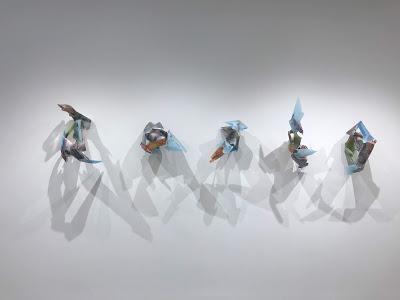 However, when you examine the organic forms closely, the synthetic nature of their materials is confirmed. Seductive swirls of metallic pigments, glitter, beads, and tinsel are suspended in sleek resin forms, composed into arrangements on the wall or the floor. Unfortunately, the materials’ obvious origins in craft-store kitsch strip the works of their mystery. Though it is a pleasant experience to explore the layers of texture and transparency, ultimately the works are more compelling from a distance. 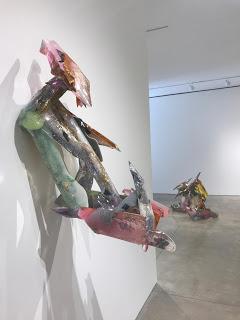