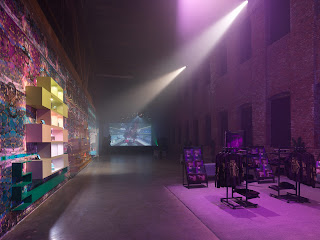 You’re at home is an unsettling spectacle of commercial allusions, enigmatic rituals, and appropriated projects of Jacolby Satterwhite’s late mother, Patricia Satterwhite, who suffered from schizophrenia. The central environment is a long, low-lit room with a stage at one end and a retail environment at the other. Commercial displays sit against a neon kaleidoscopic wallpaper, and an overstimulating series of videos are projected under a cluster of disco balls the stage. Overwhelming, dazzling excess is the common aesthetic. Also on view are some of Patricia Satterwhite’s original drawings and notebook pages in a much more traditional gallery setting. The press release for this show states that the “authorship between mother and son is intentionally blurred,” raising questions of the artist’s responsibility for his mother’s work and legacy. But that line of questioning is not pursued in this exhibition. Rather, by showing their work side-by-side, the exhibition implies a false equivalence between the two individuals. False because only one of them intended to show this work, has power over the context of this display, and is able to consent to the use of his image in this public spectacle. Even assuming the best intentions behind the appropriation of his mother’s work, You’re at home makes a spectacle of her mental illness, and the ethical questions arising from that situation overshadow the content of the artwork.
Posted by piejoy at 10:47 AM