Doris Salcedo at the Guggenheim (revised)

Tables, chairs, shirts, shoes, grass, rose petals, and hair. Familiar things that, in Doris Salcedo’s work, carry the weight of violence and oppression. From June to October 2015, the Guggenheim presented Salcedo’s retrospective featuring works from 1980 to the present. The exhibition showcased the artist’s subtle but powerful approach to the lost lives of marginalized people.

The exhibition took place in the four levels of the Guggenheim’s side galleries, a more traditional space if compared to the peculiar circular ramps surrounding the rotunda. Although the space felt awkward at first, with its columns, small irregular galleries, and circulation through emergency stairways, it soon proved to be a good setting, providing an intimate – almost claustrophobic – experience that forced visitors to confront Salcedo’s works.

The artist’s engagement with the effects of political violence in Colombia, her home country, is present throughout her works. But Salcedo’s art does not require a back story or the use of long labels; her work is able to touch viewers without much explanation, addressing universal experiences of loss, violence, and death. In Plegaria Miuda (2008-2010), Salcedo filled a room with paired wooden tables – one turned upside-down on top of another with a layer of dirt in between them. On the top wooden surface, grass grew through the cracks. Referring to the death of marginalized people both in Colombia and in the United States, the work carries a sense of mourning but also of hope. 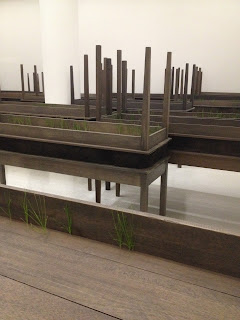 Perhaps more impactful is Salcedo’s untitled long-running series (1989-2008) of domestic furniture filled with concrete, which instantly evokes a sense of loss. Chairs, armoires and bed frames lose their functionality and turn into memorials. As in houses abandoned due to war or catastrophe, these objects remain as witnesses to lives that ceased to exist. 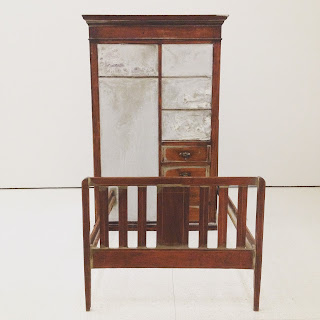 Salcedo’s art is an attempt to remember the many anonymous lives that were never mourned due to war or political violence. Whether in Colombia, United States, or any other country, Salcedo reminds us of the fragility of life and, more importantly, of a sense of compassion that is sometimes lost in the midst of so many tragedies.