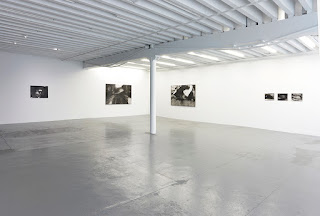 Smudges of dark black charcoal compel viewers to squint their eyes and scrutinize the enigmatic figures in Raha Raissnia’s paintings. The bare space and clean white walls of Miguel Abreu Gallery are accentuated by the robust contrasts of Raissnia’s works that are boldly installed. Raissnia’s somber vision is delicately demonstrated not only through her paintings but also in her works on film. Her most recent video work, Longing, is a 16-mm film that captures the solitude life scenes of New York in 2013. The camera angle and the crop of the frame that are hard to figure out at a first glance emphasizes the ambiguity in a narrative sense. This film consists of her paintings, drawings, film slides, and even raw footage that she recorded with her mobile phone camera. These materials are altered often by cropping into more zoomed in composition and scratched to show etching style. Both of her two-dimensional works and films present the abstraction of erratic movements and locomotive actions. 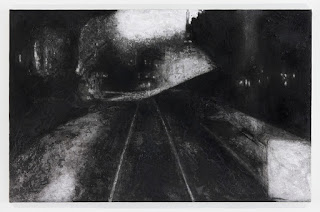 Blurred images that reveal the quick fleeting moments are successfully established using various materials, such as Sumi ink, compressed charcoal, oil paint, and film strips. Similar to her two-dimensional works, Raissnia’s artistic films are composed of several mediums that are mixed over layers of paints and scrapings on the slides. The film is made out of her painting works. Films, in general, are often times considered to be a very different genre of art compared to the medium of painting, especially when the paintings are so abstract like Raissnia’s. However the similarities in both mediums of works allowed to bring connections among them. Therefore, the exhibition as a whole demonstrates the unity in theme and correlates to each work’s abstract visions. This approach allows the viewers to take in the exhibition as one wholesome experience. One of Raissnia’s work that clearly conveyed her emphasis on the longing tones and capturing of the memory is a mixed media painting, Main drag (2015). This dreamy image manipulates the oil paints by scraping and blotting and also by smearing the charcoals. One can hardly determine the time period of this work and where this picture is taking place. These barely comprehensible suggestions of images with vague textures and figures allow the visitors to feel like they are dreaming inside Raissnia’s mind. The wide space of the exhibition evokes surreal and eerie moods and becomes a sensation as a whole.
Posted by Rebecca Lee at 12:15 AM