Jim Shaw: The End is Here at New Museum

Before being crowded into the elevator, the only access to the exhibitions at New Museum, I owned the freedom to exchange conversations with others. After the elevator left me standing at the entrance to Jim Shaw: The End is Here, the artist's perspective of the world was forced onto my thoughts. A survey of Jim Shaw's artistic career invaded three floors of the museum to display his visions of pop culture and subconsciousness in drawings, paintings, and installations. However, the overstated pop culture references caught in the act of sex did little to justify his expression but narcissism with the desire for attention. 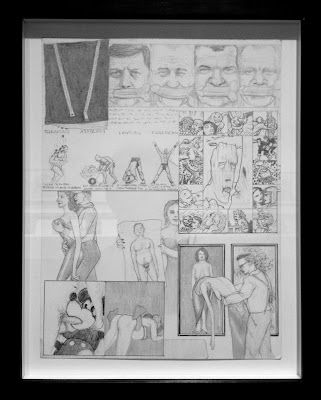 In Jim Shaw's Dream Drawings (1992-99), a series of comic strips with sex being the dominant content recorded the artist's dreams after waking up every morning, revealing the erotic pattern of his subconsciousness. Browsing through an entire room of obscure pornography-like drawings where Micky Mouse bites on a penis and zipper grows on a vagina, I doubted the truthfulness of the project for its quality tailored to satisfy the viewer's curiosity. Pop culture references such as President Kennedy and Wonder Woman are sacrificed to keep the viewer's interest while Jim Shaw tells stories about disgraceful dreams under his interpretation. The collections in the exhibition showed the artist's shallow understanding of human interest through a single lens unworthy of conversation exchange.