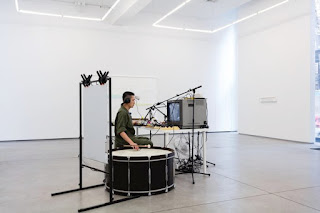 I was on my way to the Drawing Center when I first caught a glimpse of the man in the gallery. Behind the pile of sound equipment and monitors a drummer sat without a band. Looking in from the street at Samson Young's show "Pastoral Music," I wondered if I'd caught someone in the middle of rehearsal. The gallery looks spare, with just a few pieces on the walls.

Entering the space, you start to see what the artist is doing, even if you can't yet hear it. Young stares into a monitor. There is dirt on the table in front of him and a large drum at his feet.

He is carefully building sound effects. A walk around his tangle of equipment reveals what he is dubbing: video of bombings, the familiar green night-vision images from the beginning of the war in Iraq. 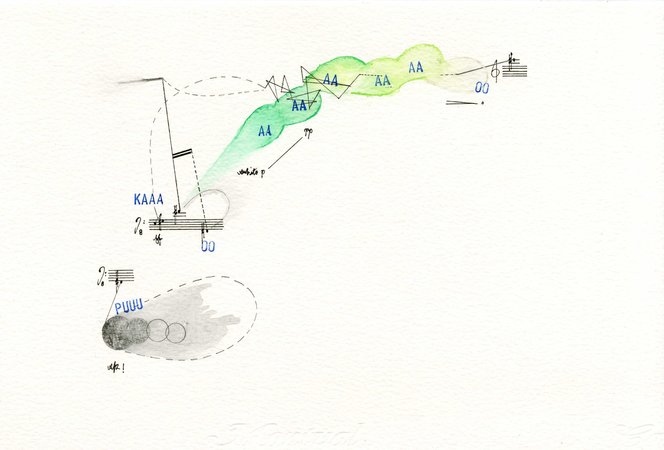 On the walls there are delicate drawings, carefully penned diagrams that live somewhere between abstract musical notation and battle plans. Next to each is an FM radio frequency, a cue for the visitor to find the little radios hanging on the wall and tune in. This worked out a little less elegantly than intended, as random radio stations blared out until a gallery attendant instructed everyone on how to use the radios. The radio stations are playing sounds that Young is creating live in the gallery. Sounds that may correspond to the drawings in front of you, but you just can't quite figure out how. There is something eerie in the beauty of the drawings, since they seem to  representations of bombs and bullets, or battle plans at the least.

However, the show fails to cohesively tie together its disparate elements. All of these potentially interesting pieces fall a little flat in the confusion of trying to experience the show. It feels less like a meditation on war and more like an experiment on how to display sound art.
Posted by Djavan at 4:59 AM