JIM SHAW "THE END IS HERE" @ THE NEW MUSEUM 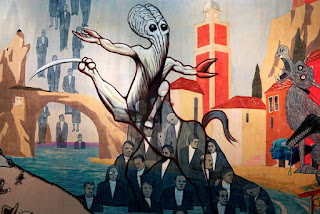 Labyrinth: I Dreamt I Was Taller Than Jonathan Borofsky
Is it disrespectful to describe Jim Shaw’s dynamic retrospective at the New Museum as a glorified sketchbook? Let me elaborate: “The End is Here” is certainly one of the most unfiltered shows I have ever seen. The show contains large-scale painted works, small-scale comic book illustrations, found “thrift store art”, and cult religious relics. There’s a lot to look at, really; it’s almost too much.

This is telling, however, of the frenetic (and often carnal) energy of Shaw’s diverse sources of inspiration. His work breathes new life into the surreal and the subconscious by inviting audiences into the mind of, perhaps, an eighth grade boy. There is a gritty, sexual component to some of the artist’s comics, for example, which often feature pornographic scenes, but star quasi-ultra-sexy alien maidens. Though initially unsettling and a little awkward to look at, there remains a curious innocence in the untethered weirdness of his illustrated works.
Another unforgettable part of the show is Shaw’s collection of found art. It’s like entering the attic (or basement) of someone on the show TV show Hoarders; Shaw has obsessively scoured the corners of both our physical and our digital world and found a plethora of unfiltered and unprocessed art, the stuff that would make an art snob recoil in terror. But with this collection of work Shaw shamelessly asserts his unique vision of the human condition.
Posted by Unknown at 9:45 AM