"March Forth" by Henry Taylor at UNTITLED 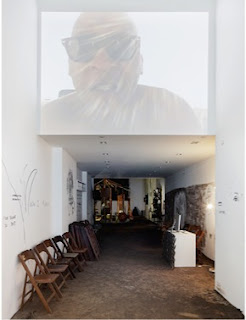 Henry Taylor, a Los Angeles-based African American artist lauded for his colorful acrylic portraits, has a gift of capturing the nuanced moods of his sitters despite using a bare, non-naturalistic painting style. March Forth, his new solo exhibition, is a foray from these figurative paintings into drawing, sculpture, and installation. Inspired by Taylor’s recent trip to Ethiopia, the gallery has been transformed into a low-lit abyss complete with a dirt floor, a taxidermied hyena, and a reconstructed hut of found objects. Taylor’s search for self-expression with new media regrettably feels like a stereotypical African rendering.

The major portrait included in the show is Taylor’s looping home video, presumably created during his trip, projected on the wall above the gallery’s entryway.  His muffled speech into the camera draws our focus to the image of himself as sitter. The sun gleaming behind his left shoulder showers rays across his unclothed body, which fluctuates between discernible and silhouetted due to his enthusiastic movements. Flanking the seating area below the video are walls covered sparingly with partly erased outlined figures and ambiguous text, including a series of letters that metamorphose from the shape of a “U” to that of a “Y” accompanied by the parenthetical “This is not a Y,” to an upside down pitchfork, the eyes of an outlined figure, and finally the shape of a hook. The fact that these transformative images neighbor his introductory self-portrayal sets the stage for the show as Taylor’s efforts to push his art in a new direction. 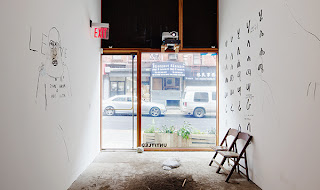 One of the large-scale works in March Forth is a black hanging sculpture that spans the gallery’s rear wall.  The twelve-foot long untitled piece consists of plastic bottles, detergent containers, and gas canisters nailed to a plywood support spray-painted black. Taylor undoubtedly recognizes their resemblance to traditional African masks, and he accumulates the containers into a collage of varying shapes so that faces of numerous dimensions pop out. This concept is hardly new, conjuring the painted jerrican masks by contemporary African artist Romuald Hazoume. Yet the two artists differ in their treatment of the containers; Hazoume employs uniformity in his assemblage while Taylor abolishes it. The latter’s approach is spontaneous, subtly applying order to a haphazard collection of bottles that might have once been scattered across his studio floor. 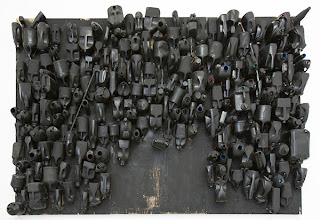 The centerpiece of the show is Taylor’s reconstructed Ethiopian hut taking up the central space of the gallery. Made up of found and collected objects, the hut is a hodgepodge of brooms and other cleaning tools, a rolled up rug, wooden wheels, ladders, beer bottles and walking sticks for the blind. The openness of the structure welcomes the viewer in for a turn around its interior, and inside are piles of dirt that appear placed equidistantly apart. At its back sits a television playing the video interview of an Ethiopian boy, a Denny’s box sitting atop as if signifying a westernized influence. The hut appears to be an attempt at calming or systematizing a chaotic assortment, but falls short of intelligibly communicating any greater purpose. The materials do not seem to be placed schematically aside from the goal of allowing the hut to securely stand. Taylor has been known to use found objects like cigarette packs and cereal boxes as surfaces for his paintings, but the theme in this context—dirty and lacking a framework for deeper contemplation—reads as a clichéd characterization of Africa. 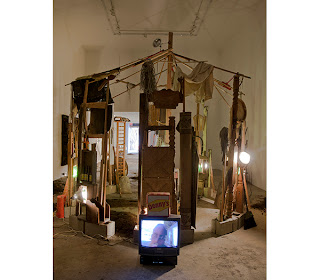 In March Forth, Henry Taylor’s exploration into sculpture and installation is the focus of the show, but too many stereotypical elements—the dirt, the hyena, the hut—give the show a banality and drown out the profundity behind these new creations. For a figurative painter with such a knack for capturing the idiosyncrasies of his subjects and the larger cultural implications they represent, these qualities are not portrayed through this show.