Cindy Sherman at the Museum of Modern Art [FINAL]

To be fair, any retrospective has highs and lows, and the Cindy Sherman exhibit at MoMA is no exception. On the one hand, the expanse and diversity of work from her early career in the mid-1970s to the present is impressive, considering Sherman works almost exclusively in self-portrait photography. For those looking for thought-provoking work, her beautiful and famous “Untitled Film Stills” (1977-1980) steals the show. Each print is enticingly ambiguous, and Sherman shows off her wondrous ability to transform into an array of different characters with minimal makeup and props. In nearly every print, Sherman is the only figure, but the frozen action suggests additional—probably male—characters just out of the frame: in “Untitled Film Still #10,” Sherman, picking her spilled groceries off the kitchen floor, glares up at him with a mixture of anger and fear. The quiet profundity of this work invites questions and interpretations both on the ambiguous character and scene as well as Sherman’s larger sociopolitical message on the objectification and fetishization of women in art and media. 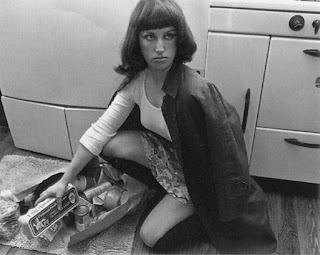 Unfortunately, as one moves through the exhibition, “Untitled Film Stills” is nearly drowned out by her food-and-body-fluids period of the late ‘80s. These are some of the most difficult pieces to forget, not because they are conceptually strong, but because they are simply disturbing and unpleasant to look at. One can perceive Sherman’s transition into this phase with “Untitled #175” (1987), perhaps the last of the earlier works allowing the viewer time to pause. Sherman’s figure is hard to detect in this composition. We first observe, scattered across a beach towel on the sand, a pile of half-eaten donuts and pastries, before noticing the puddle of vomit next to it. Then we finally see Sherman, her hysterically weeping face reflected in a pair of sunglasses in the background. This work is clearly meant to bring to mind issues of body image, self-hatred, and consumerism, and for some viewers this may be disturbingly familiar. But Sherman is delivering her content without leaving much room for interpretation or imagination. And this portrait, conceptually shallow compared with the previous work, is the first in a series of increasingly distasteful prints which so heavily feature chewed-up food, pustules, vomit, feces and prosthetic genitalia that it’s difficult to look at them long enough to extricate any meaning at all. 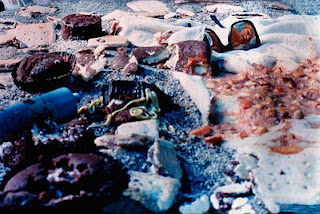 The benefit of these loud, less successful works may be that Sherman’s quieter work is intensified, and welcome in comparison. The exhibition includes one unexpected gem: Sherman’s 1975 stop-motion animation, “Doll Clothes.” It is one of the few, if only, titled pieces, and the only time-based work. In it, a paper cutout of a nude Sherman, embarrassed at her nakedness, dons a paper doll dress and admires herself in the bureau mirror before being captured by a pair of large hands, which strip her and put her back in her case. Though the animation is inexpert, the film manages to encapsulate the theme of Sherman’s entire body of work not only by illustrating her personal preoccupation with dressing up and adopting alternate personas, but as a tale of frustration accessible to nearly all women. We are pressured to invest time and money taking care of our appearance, but society remains obsessed with our nakedness and helplessness, and ultimately we are not in control of our own bodies. The film concludes with a humorous but somewhat profound presentation of the many cutout figures used in the animation, arranged in a caterpillar-like queue: here, bunched together, are the innumerable faces of Cindy Sherman. If only the entire exhibition could be replaced with this single work. 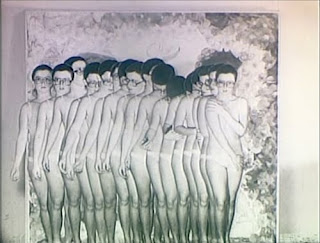