Cindy Sherman’s current MoMA retrospective spans work from the paper doll cut-outs she made while studying at Buffalo State College, and ends with the artist’s most recent mural-like, large scale tableaus. The show, which assembles thirty years of work, demonstrates Sherman as an artist with a method (masquerade) that has remained largely unchanged, though the photographs’ messages have lessened in weight. Her work, in retrospective examination, falls flat. Tracking Sherman’s evolution, or lack thereof, across her photographic oeuvre disappoints. Though her earliest photographs feel original, exploratory and conceptually important, the latest work comes across as the efforts of an artist who is repeating herself, in a category of representation she created and in which she subsequently became trapped. 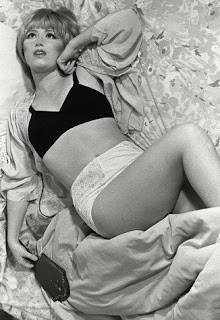 In 1977 at the age of 23, Cindy Sherman began her series of sixty-nine Untitled Film Stills. In this seminal project, Sherman masquerades as various female archetypes, such as the damsel in distress, brought into cultural consciousness by cinema from the 1940s, 50s and 60s. This series bears the marks of Sherman’s experimental process—the black and white film’s grain, the campy props, and the reinvention of the artist’s own living spaces are markers of a genuinely inventive process, and the work employs an intuitive sense of psychology. In Untitled Film Still #6 (1977), Sherman exemplifies the model of the woman at home as a swooning sexual object. In character, the artist appears half-dressed, plastic-faced, twisting in tangled sheets, gazing upward and outwards of the frame. This masquerade, through drawing on conventional depictions of women in culture, also lets the viewer know it is a construct: Sherman’s face appears mask-like, rendering her expression of helplessness hyperbolic. From beneath her arm, a shutter-release cable is visible, which heightens the viewer’s awareness of the scene’s farce. 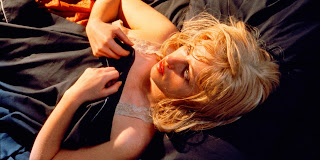 Sherman’s work recirculating female stereotypes into cultural consciousness continued with her 1981 Centerfolds series. This work operates in the same vein as her Film Stills, but exceeds the conceptual and aesthetic limits of the previous project. The Centerfolds feature Sherman once again playing the victimized woman, this time in a series of disconcerting, lush color photographs. The large pieces, shot in a wide format to mimic the centerfold pages of magazines such as Playboy, make the viewer feel complicit in the violation of Sherman’s character. In Untitled #93 (1981), Sherman again portrays herself a powerless woman on a bed. Her eyes, glazed, stare vacantly and with some degree of terror off-screen, nearly shielded beneath her sweaty, matted hair. In this photograph, Sherman taps deeply into the psychology of the gaze. Rather than just plastically appearing as the cultural construct of a sexualized woman, here Sherman fully embodies her character’s emotional depth. With this photograph, Sherman doesn’t just put herself on display; she also implicates the viewer in a sexual violation. 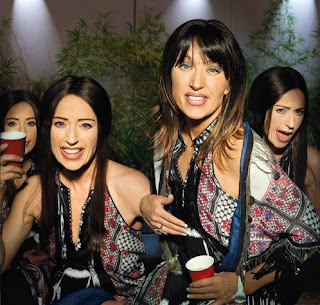 The work from the decades that follow never feels as potent as these early series. There are moments, like in the History Portraits, that the artist’s original blend of sexual stereotyping and campy humor shines through, but largely the work feels like a disappointment, a bad joke about itself. This feels true of several pieces from her 2008 Society Portraits series, most notably Untitled #463 (2007-08). This photograph features a digitally constructed montage of the artist posing as four different women, in a scene that could be taken from an exclusive party. The women are frozen, mid-gesture, all sporting red plastic party cups and grotesque, exaggerated makeup. In this photograph, Sherman still conjures an archetype of woman created by media (these characters evoke the regrettable “Real Housewives of New Jersey” aesthetic), but the effectiveness of this image and the others in the series is lost. The walls of the Museum are filled with different iterations of Sherman's face, but the recent work feels repetitive while the earlier work never does. We are conscious that we are looking at a photograph of the artist, instead of being caught in the willful suspension of disbelief conjured by the Film Stills or the Centerfolds. The viewer’s role is non-existent here. With no sense of complacency in the cultural perpetuation of female stereotypes, the power of the work deflates. The viewer becomes a fellow blasé partygoer, a person with no claim in the work, or role to play, and like the latest portraiture, they leave feeling plastic, bored.
Posted by bearicaquinn at 9:20 AM