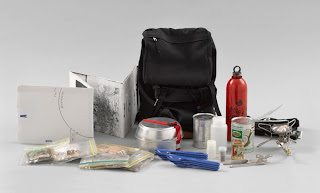 Print/Out at MOMA is a medium-specific exhibition featuring twenty years of printmaking from the museum’s permanent collection.  The show covers a wide range of print technology, from Xerox to aquatint.

The entryway to the exhibit is coated in half-tone dots from floor to ceiling, introducing the print as a series of dots, which in combination as a grid or matrix allow us to reproduce and multiply an image.  Print/Out succeeds in showing us why artists choose to work in print beyond just the creation of the multiple.  The use of the print can serve as a way to charge the ideas explored by artists, as in the case of Rirkrit Tiravanija whose portable Untitled (rucksack installation) (1993) editions become tools that facilitate interpersonal experiences.

Print/Out features the usual cast of characters associated with print media, including Damien Hirst, Kara Walker, and Robert Rauschenberg.  The inclusion of artists less commonly associated with print, such as Chris Burden and Rirkrit Tiravanija, makes the show more compelling.  The work chosen for the exhibition illustrates that print is more than simply a process toward creating a multiple, it can be used to create a unique art object as well.

The arrangement of Print/Out is ambitious, beginning with a salon-style presentation of large prints, displayed over the dot pattern found in the entryway to the gallery.  Work by unrelated artists are arranged together, similar only in the fact that they utilize print to expand the ideas of each artist.  With this understanding it is easier to approach works without trying to tie them together conceptually.  Instead, the audience is presented with the many ways in which print technology is used to expand the ideas of artists.

In some cases the use of print media becomes an unnecessary step in the artist’s process, as in Chris Burden’s, Coyote Stories (2005).  Coyote Stories documents the artist’s interactions with coyotes on his Malibu estate through a collection of journal entries on lined paper.  These journal entries were photographed and printed digitally, accompanied by drawings reproduced as etchings.  It is difficult to understand the motivation to use print in this case. Perhaps the reproduced images and their distance from the artist’s hand are a metaphor for the relationship between artist and Coyote.  In any case, mechanical reproduction does not enhance our experience with the work.

Robert Rauschenberg’s, Surface Series from Currents (1970), is a series of screen-printed works created by collaging newspaper headlines.  These prints map out time and capture a moment on the flattened surface of the paper.  Rauschenberg’s sensitivity to the imagery collected and his ability to embrace the half-tone pattern found in newspapers and advertisement allow the print to become a unique object, not simply a copy or reproduction of the original newspaper clippings.

Rirkrit Tiravanija stands out as one of the few artists in the show whose prints are clearly a re-activation of older works.  The artist has recreated, Pad Thai (1990), where the audience was served Thai curry in the gallery space, a gesture that encouraged interaction between viewers. Untitled (rucksack installation) (1993) facilitates the interaction between viewers, but in a portable form.  The edition includes a rice cooker, ingredients for curry, instructions for building a tent and a backpack.  This distribution of Pad Thai changes the potential for interpersonal experiences, moving them outside of the gallery setting.  Tiravanija’s Untitled 2008-2011 (the map of the land of feeling) traces time through appropriation and patterning, similar to Rauschenberg’s Currents.  This series of large scrolls stretch horizontally across the wall and include maps, mazes, and pages from the artist’s passport, capturing the experiences of the artist as he traverses the art world.

The works featured in Print/Out are not in dialogue with one another thematically, as the audience might expect with a curated show.  Instead, we are shown the many ways that artists utilize print technology, distribution, and appropriation, to expand their ideas.