The Ungovernables at The New Museum (Final)

The title of the 2012 New Museum Triennial focuses on the attitudes of the group of young artists invited to partecipate in the exhibition. The curator Eugene Joo, Director of Education and Public Programs at the New Museum has chosen the title "The Ungovernables," labeling the practice of these artists as something that is not submissive  but based on self-determination. More than fifty artists were involved, all born between 1975 and 1985 and many of them have never previusly exhibited in the United States. The show is marked by a distinct internationalism, presenting also the work of two collectives, one from Africa and the other from the Middle East.  These artists share a common method: they move around the world in what could be construed a nomadic practice and make their own rules work after work. The ideas of insecurity and instability - as well as the compositions of the materials - were elected by Joo as symbols of the contemporary condition. The exhibition reflects the needs of a generation of artists born after the independence movements and revolutions of the sixties and seventies, with concentration on the Middle East, Asia and South America. This period is defined by a general mood of disillusionment, in countries which are characterized by colonialism and dictatorship and ruptured by economic crises and social unrest. Many of the works are site-specific and they  consciously move away from the conceptualization of gender trying to express the Zeitgeist of this troubled time. 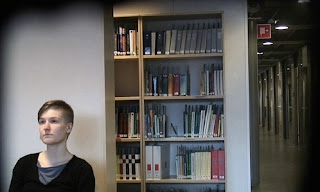 Pilvi Takala’s video, The Trainee, was shot in 2008 during her training in the marketing department of the company Deloitte, in Finla. The artist’s work breaks the rules of professionalism and what is acceptable behavior within an office environment, inviting the viewer to peek at an ordinary office through different hidden cameras. We see her sitting at her workstation all day doing nothing during her apprenticeship. She has a blank stare and occasionally she leaves her desk to ride the elevator. Initially, her colleagues are curious about her but after a while they become suspicious. She declares she is mentally working hard answering she is doing ‘brain work’ and in this way questioning what the proper method of action for her collegues and the entire working system is. 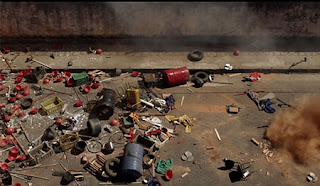 Cinthia Marcelle and Tiago Mata Machado’s video, O Século, is quite magnetic. The video shows an empty road eventually filled with flying debris: caps, plastic milk containers, fluorescent tubes, glass and casings. Without being able to see who throws them, the work creates a visual pattern made of those ordinary objects. 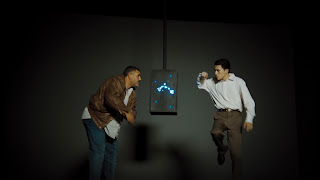 Hassan Khan shows a video of a man dressed for clerical work and another man with his shirt tails hanging out over his jeans, probably a lower class man. They dance and interact with each other in an empty black space. They symbolize street protests and dancing movements in a comic exchange of gestures. The video is installed in a black room and the loud soundtrack entices spectators to participate in this strange dance without an actual invitayion to do so. The viewer remains a stranger and is not immediatly aware of the group dynamics. This creates a sense of cultural gap between the video’s space and the museum’s environment, as well as between the artist’s intention and the viewer’s role.
In general, the exhibition attempts to an ungovernable state of art today and catches the spirit of a time of a multifaceted media power and economic crisis. The curator declares that these artists do not comment on the politics of their time but they are actors within the politics of their time. This statement clarifies the status of the exhibition, revealing a general sense of doubt and uncertainty. These young artists offer more uncerta than faith and in our global world they invite viewers to expand their perceptions of different cultures, instead of looking for a new specific cultural center. However, the idea of an exhibition curated in a museum with the premise of ungovernability is a paradox. It attemps to call to light what is unacceptable but certainly not new. By virtue of this, it becomes a show more about self-reflexivity than ungovernability.
Posted by cia at 6:11 PM