Arcangel Leaves Much to be Desired 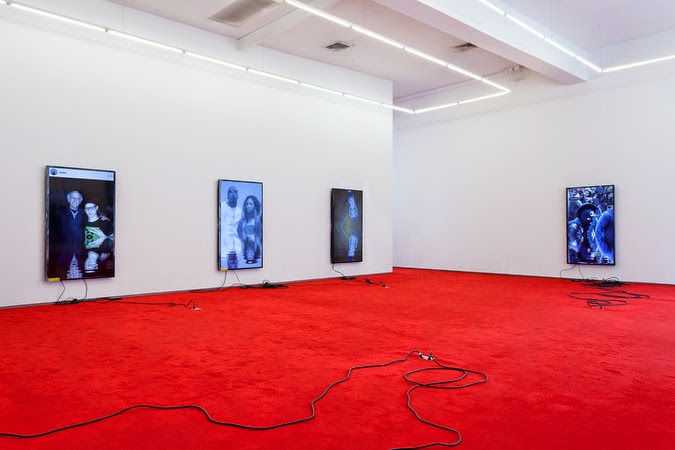 36-year old contemporary digital Art veteran Cory Arcangel’s latest show at Team Gallery titled “TL;DR” (an internet acronym that stands for too long; didn’t read) was comprised of a series of digitally manipulated images playing on monitors that were hung from the wall like paintings. Most, but not all, images on the monitors featured pop culture references from the past 5 years. Images of icons like Beyonce and Jay-z, Britney spears, Larry David, and Skrillex were among the subjects. The ground of the gallery was carpeted with a bright red carpet, possibly as a reference to pop cultures’ famous red carpet.

Arcangel used a java applet created in the 90’s called “Lakes” to manipulate the images. Lakes’ algorithms took the images and manipulated them so they had a soft, rippling effect towards the bottom. The movement that Lakes created in the images was soothing and somewhat familiar.
While the images were aesthetically pleasing, there was much left to be desired on a deeper conceptual level. The idea of using “older” technology to create digital works is interesting, but there is no apparent direct tie between the technology he used and the subject matter. Why did Arcangel choose to use “Lakes” on these images and not different subject matter? There was a missing link between the technology and the subjects.

Additionally, there were some pieces that seemed to be wild cards, or not really fit in with the majority of the other pieces. For example, in the back of the gallery there was one piece that was just geometry, and had hardly any manipulation. Unlike the rest of the pieces, it was not a photograph, and did not have the digital manipulation. While it was a nice piece, it really did not fit in with the rest of the show, and stuck out as something that wasn’t really needed.

Overall, Arcangel’s show was visually pleasing and a fun experience. Contextually, it was a progressive show for the art world, however not his strongest due to lack of underlying concepts, and did not leave much to think about prior to exiting the gallery.
Posted by Unknown at 9:50 AM