In the gallery’s front room are Doherty’s black and white photographs mounted on aluminum. These nearly square compositions depict street detritus, corner spaces, abandoned sites, industrial fences, and objects that have had long human manipulated histories all set in his Derry hometown in Ireland, which has a bleak history of sectarian violence and division. The city of Derry was the location of much civil unrest during the era of Troubles in the 70’s into the late 80’s, and IRA and Union/Ulster violence and militarization made the area a warzone.

Doherty’s themes of isolation, repressed memories, misinterpreted histories, and severe political violence are elegantly encapsulated in the form of a new 10 minute video entitled, The Amnesiac 2014, coupled with the 15 minute Remains video from 2013. Doherty’s work intimates something macabre or evil that’s below the surface aspects of the two-dimensional visual.  With titles of photos such as Future Fear I-V or Damage I-X, his work suggests that ghosts of the past haunting modern locations, and intimates for the viewer the need to forensically scan the texture, surfaces, details, isolated spaces in his compositions to reveal the historical, emotional and political truths of his subject matter. His films' moods are much based upon acts of meandering, say, through forests, or abandoned residential sites, and one gets the impression that Doherty channels a subtle, ear to the ground listening in order to transcribe the near Lynchian ambiance of the sites he captures into video or photography. Lynchian – as a juxtaposition of the macabre with the mundane.

In The Amensiac, the protagonist drives his vehicle down a country road  (in a stunning hypnotic hood mounted camera shot with tree shadows scraping the surface of the reflective windshield) only to stop the car in a far off location of the woods in order to revisit a repressed memory of binding a victim and leaving him to die in the forest. True to the ironies of Lynchian moving pictures, the man continues back in his car and proceeds down the road in nearly the same rhythm and way the film started. 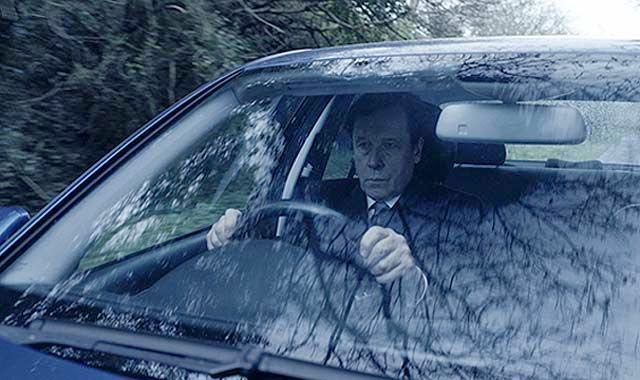