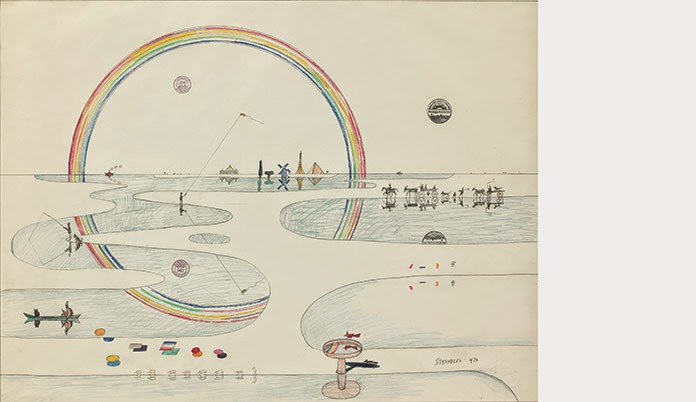 Saul Steinberg
The current show at Long Island City’s ScultpureCenter, Puddle, pothole, portal, is a group show featuring 23 artists and a variety of work. SculptureCenter’s beautiful building was just renovated, and Puddle, pothole, portal becomes a kind of trail of sculpture that tours you through the space, begging you to explore. In addition to a large main room, several small side rooms, a courtyard, and a spooky maze of a basement house the artwork in the show. Puddle, pothole, portal showcases many different kinds of sculptural work, including paintings, installation, and video work, which makes for an interesting show that pushes the notion of what is traditionally called sculpture.


On the main floor, beautiful stained glass and an open warehouse space create a relaxed atmosphere to take in the work that is dotted around the room. However, in the basement the long hallways are so dark you might not think the show continues. There the fun really happens, with the louder, colorful moving sculptures and the maze like challenge of not knowing what lies ahead.  While some of the pieces are more successful than others, like Abigail DeVille’s rotating conveyor belt with severed mannequin parts next Judith Hopf’s painfully un-funny video about a flood in an apartment, the show seems to work as a hodgepodge of styles and medias, capturing diversity of sculpture now. Puddle, pothole, portal has a lighthearted feel to it, with many of the artists using cartoon imagery and comical gags that keep you on your toes so as to not accidentally step on the art. From Olga Balema’s Long Arm 2, a rubber glove several feet long, to Maria Loboda’s bronze lobster claws subtly sticking out of the wall, the humor and attention to detail and the ways the artists are showcasing their humor in Puddle, pothole, portal is unparalleled. Posted by Grace Robinson at 8:04 AM