Describing itself as a “catalyst and an advocate for new ideas”, MoMA PS1 is not the first place one would expect to find antiquities. Nevertheless, a cavernous gallery on the museum’s second floor is presently home to several Roman sculptures, dating to the first- and second-century AD. These five works – Roman busts – have been painted and assembled by Italian artist Francesco Vezzoli. 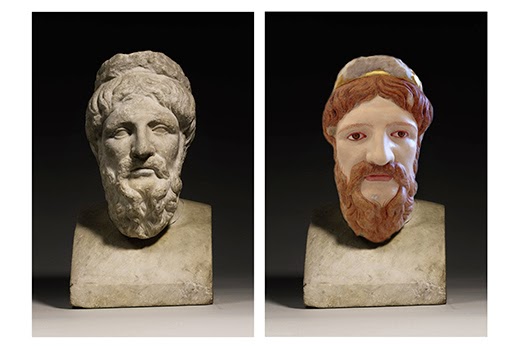 The busts are installed atop thin, minimalist pedestals, each spot lit in an otherwise near pitch-black gallery. Each brightly lit work is brilliantly life-like, bearing flesh-tone skin, brightly colored eyes, and other animating details. Vezzoli, in coordination with Clemente Marconi – a historian of Roman art – has painted each to closely resemble how it would have originally appeared during the Roman Empire.

Though it is easy now to envision the ancient Western world as a paradise of glistening white – a world of bright white temples filled with gleaming white sculpture – it is known in academic circles that polychrome was the norm. In truth, the polished marbles the public now knows are the results of over-zealous post-excavation cleaning efforts common in prior centuries.

By painting these busts ­– an immensely interpretive act – Vezzoli hugely alters the appearance of the sculptures, and subsequently their reception by the public. Further, positioning the busts in an unapologetically modern setting alters their reception still more. In lieu of lifeless, marble sculptures presented in the staid setting of an encyclopedic museum, Vezzoli presents polychrome busts in a quasi-theatrical setting, turning their usual presentation on its head.

At the same time Vezzoli’s painting of the busts is a restorative act, bringing them closer to their original appearance. Vezzoli’s painting of them closely mirrors what would have been done in Roman times. Normally made in workshops, busts of this sort would have had multiple authors. After the work of the sculptor was done, the turn of the painter would come; the painter’s work altering the sculptor’s.

Vezzoli’s alteration of these busts, as simple an action as it is, successfully problematizes myriad forgotten issues about the way these busts are treated, displayed and understood.