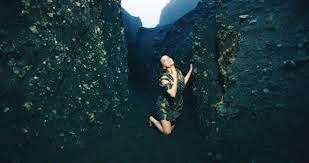 “Black Lake” is a video work by Bjork from the album “Vulnicura”. This video describes disappointment about Bjork’s broken marriage and expressing her pain. The music represents the downside of her life. It sounds sad but strong. The lyrics spell out her strong desire and hope for a better life with the emotional music background.  The best music video is not about telling or writing a story, but instead you can feel it's experiment when you see it; in this case, Bjork successfully inspired the audience her pain with the strong emotional dance which accompany by the color changing scenes and the dynamic background music.

As a photographer, from my point of view, every single scene is seen as a picture. Color, costume, and music are the main elements in the video that represent different feelings of Bjork. At one point in the lively video, there was a bright electric blue stream merge into the darkness. The electric blue stream comes out from the rocks emerge on the scene; it catches my eyes. It is an identity for hope in Bjork life.

At the second half of the video, the background changes. Even though the daylight and grassland were still in a cold color, it looks more hopeful with the bright sky background.  The camera's distance from Bjork is fixed, but her behavior changes. Her dress changes to silk fabric, light and graceful. She is standing in the middle of the green flatland, smiling and singing the song. And the lyrics were “ I am a glowing shining rocket. Returning home. As I enter the atmosphere. I burn off layer by layer.” Bjork steps out of the shadow with sparkling body and the light grows brighter, and the scene becomes a representation of her happier future.

Additionally, her gesture is also an important element in Bjork’s video which reflects the feeling of her lyrics. She always performs in the middle of each shot. She is in a substantial position of the shot which expresses her egoistic and feminist personality. In this video, she falls to her knees into the loam of a cave floor and her skin as pale as death. It is a beautiful picture and she seems lonely and helpless. She sings, “My heart is enormous lake, black with potion. I am blind, drowning in this ocean. My soul torn apart, my spirit is broken”. When I heard that phase, I felt sorrow and pain, and it sounded like mad than self-pity. The ending scene is her first time walking away from the camera. Her body becomes smaller. Bjork is walking away from the pain and seems peacefully quiet.
Posted by Unknown at 5:59 PM