Guggenheim presents On Kawara – Silence, Kawara’s first retrospective includes date paintings (the Today series), postcards (the I Got Up series), telegrams (the I Am Still Alive series), maps (the I Went series), lists of names (the I Met series), newspaper cuttings (the I Read series), the inventories of paintings (Journals), calendars (One Hundred Years and One Million Years), as well as his drawings. I wonder how Kawara’s long artistic journey under his immaterial and abstract concept –time- can be revealed and filled with the rotunda. However, my whole impression of this show is “bathos”, which is a little vain, and structurally matching with the coiled rotunda. 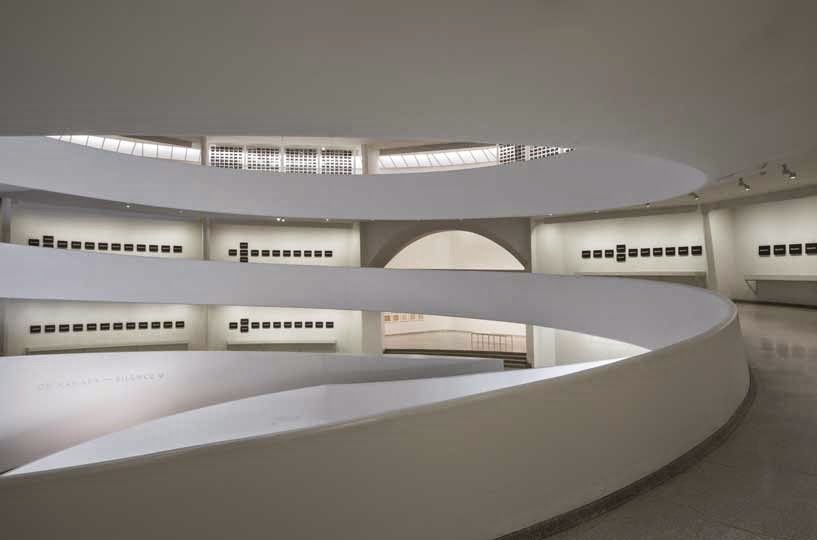 The exhibition started to fill with the wall by his early drawings, which were unfamiliar, fresh, and very interesting for me because I could see not only his diverse ideas for installation art but also his nature. Through Kawara’s series of work, viewers are inspired to imagine his everyday practices, his social connections including famous figures in the Art world, and other historical places and times where he passed. However, the way of arrangement his oeuvre repeated continuously so, I think, the concentrating energy of exhibition was loosen at the end to display the greatest One Million Years, which is on the biggest canvas work in this show. Although Kawara’s work has profound ideas and experiments about the transition of time and space, the Guggenheim didn’t transmit the meaning of his work enough and left viewers exhausted at the end.