On Kawara - Silence at Guggenheim Museum

On Kawara - Silence at Guggenheim Museum

Annually, the Guggenheim museum presents a huge solo exhibition using most of the entire gallery space. It seems more special than any other years because it is the first full retrospective exhibition of the artist, On Kawara, who died in the last July. As a big fan of Kawara, it is good chance to remember him and admire his life and works in just one space. Since it is a retrospective exhibition, there are huge amount of works from every category of his conceptual projects which were done in daily based during his life. 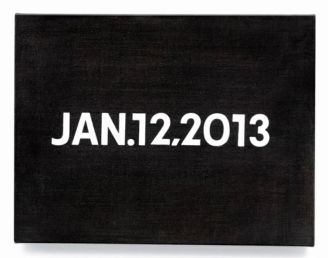 *the copyright of this image is the Guggenheim Museum

Especially, I was very impressed by the amount of the date paintings (the Today series) in chronological order, in different size and color. They usually are displayed just paintings only before but in this time they are all organized with the boxes which are the cover of the each paintings for their storage and which are also has the newspapers of that dates inside of the boxes. Also I found out in my second visit that they show this series of paintings from its start which is January 4, 1966 and the end which is January 12, 2013. The show was a good time to know a great conceptual artist who worked every single days in his own rules and Kawara did not give talks much about his works but you can found the power and depth in that silence.
Posted by Eun Jin Wang at 10:02 PM