After visiting David Zwirner‘s recent exhibition of Ad Reinhardt’s work, I had mixed feelings as watching the film The Double Life of Véronique, which is philosophically confused and dazed from what we know or believe. The exhibition includes his best-known “ultimate” black paintings of the 1960s, and, in addition, features cartoons and photographic slides that are lesser known and rarely shown to the public. Two-thirds of the show contains historical documentation, and an extensive chronology of the artist’s life. The purpose of the biographical display, curated by Robert Storr, appears to break the cultural assumption of Abstract Expressionism, and also to differentiate A Reinhardt from other abstract artists from the same era. Biographical exhibits often happen with artist’s work after his/her death to build a foundation and focuses more on “I”(artist) rather than “work”. However, I cannot help feeling that it is against Reinhardt’s Dogma to be displayed this way, but to some extent, it is somewhat amusing for the viewers to see his belief undressed at the same time.

Abstract arts are often criticized as being meaningless, cold, sterile, and purely intellectual, and showing humanistic side of Reinhardt in the show seems like the easy solution to set the standard. However, first of all, I believe the solution must be found in “work” itself than “I”. Secondly, you cannot force the meaning to define the meaning correctly. He struggled his whole life to define what Abstract Expressionism was to distinguish himself from the Abstract Expressionists, with whom he nevertheless had a good agreement in common such as artists as Greenberg would agree with. In art, he let go of color, shape, texture, size, light, and even meaning to separate his work from others.  Outside of art, Reinhardt openly showed his absolute disgust towards any humanistic themes or forms in abstract paintings such as love, death, sex, and life. He even found the “Expressionism” of Abstract Expressionism once Motherwell pointed out as the human part (Compares to the “Abstract” as the art part) disgraceful, and Greenberg was, too, not an exception. 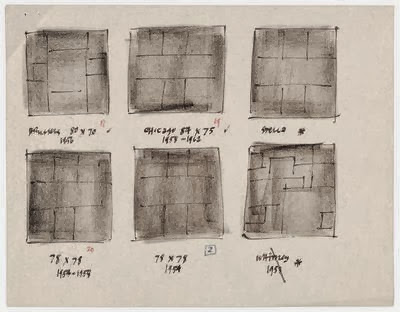 “I wrote Ten Rules for a Code of Ethics in which artists that sinned had special fit punishments, a little like that Gilbert and Sullivan” – Ed Reinhardt during Oral history interview with Ad Reinhardt, circa 1964, Archives of American Art, Smithsonian Institution.

Reinhardt believed in a philosophy of art he called Art-as-Art Dogma which was his own rules and morals as an abstract artist. Unfortunately, his never-let-go egoistical writings did not have a place in exhibition area(I found the poem in one of two old catalogs Zwirner displayed on the shelf). Instead, the easy and charming version of his irascible insights are countless cartoons and 12,000 photographs from his 35mm Leica camera were included. Black paintings in the first room explain the meaning without words without over-saying as what art should be doing, but slides are meant to lecture someone. Cartoons were used as a different means and oddly adds forced energy to the tranquil art in a connected display. This show gave me an impression that viewers cannot be fulfilled with actress alone, so needed accessories to be felt as beautiful work.  In addition, I found his preparation sketches of black paintings in the catalog odd because I remember in the interview he distrusted preparation sketches and small collage works before the large works. In the press release, cartoons and photographs are in the category of “Pictures”, and black paintings are in “Paintings”. Does truly “Pictures” explain “Paintings”? Is his work in abstract-display(meaningless) or abstract and display?