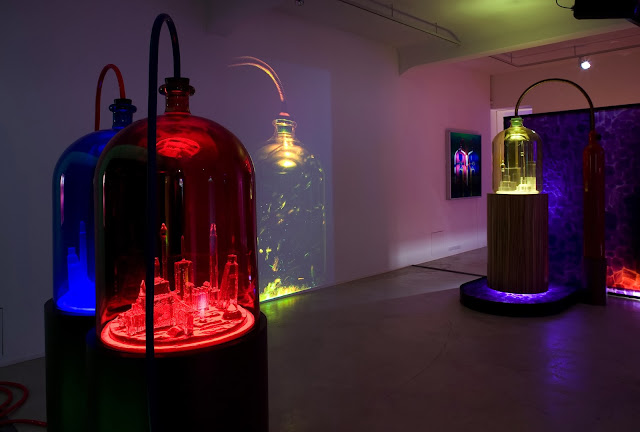 I don’t know which is more impressive, the sheer amount of work that Mike Kelley produced in his lifetime or his extreme talent for going wherever the work took him, never trying to be superficial with style and living true by the phrase, “content marries form”. His truly remarkable series was Kandor, which seemed to be his life’s work.
To those who aren’t fully equipped with their Superman trivia the work may seem extremely difficult to understand. Kandor is the capital city of the fictional Krypton, Superman’s home planet. The nutshell story goes that Superman’s nemesis, Brainiac, shrunk the city and once the man of steel was able to reclaim it, Superman placed it inside of a bell jar and stored it in his Fortress of Solitude upon the realization that he was unable to return it to it’s true size. Although this history is necessary in understanding the body of work, the aesthetics are seductive enough to be totally captivated by the artist’s vision. By the amount of work produced you can almost see into Kelley’s compulsive and obsessive relationship to the fantasy that we view but for Kelley was a reality. At the core of Kelley’s work is the innocence of childhood, and sometimes the lack there of. The Kandor series that spanned more than a decade, gives us the perspective of an adult’s desire for the fantasies, innocence, and impervious-to-harm attitude that we had as children. The projections of the bell jars with air being blown inside, creating a metallic mini tornado, serve as metaphor for the near chaos or despair of not being able to return to the innocence Kelley desires. We also get an incredibly vulnerable image of Superman as he recites text from Sylvia Plath’s prolific work, The Bell Jar (it’s an interesting combination as well, with the knowledge of Plath’s tragic life and suicide comforting a sad Superman). The work also reveals many of Kelley’s insecurities with himself to the public. There is the popular notion that the ‘big time’ artist is indestructible, has no insecurities and is so high on his pedestal that he cannot be touched, artists of fame bear a notion of immortality imposed by the public. Kelley is saying the artist is not invincible, the artist has demons just as you do and they are crippling. This rings even more true knowing that this was the series he was working on when he took his life. It’s important to view this work amongst his early stuffed animal installations as it lends us an incredibly vulnerable insight of who Kelley was as a person. It’s a wonderful display of an artist’s maturity and growth.


Aside from the Kandor series, we’re able to witness the life of a very troubled artist that wanted to possibly find answers through art, or perhaps a remedy for Kelley’s and others’ depression. It became exhausting trying to view all of the work in one visit, which proves that the work was not a desire for Kelley but an absolute need, although it does appear that he sometimes spread himself too thin in places. In a way, it seems that he was really living for his work and that was what had been keeping him with us until his depression became too unbearable.
Posted by Unknown at 5:23 PM