After her mother died of breast cancer in 2006, Sophie Calle decided to make a video of her last moments. It is with this movie, entitled Pas Pu Saisir la Mort (“Couldn’t Catch Death”), that the artist started the project Rachel, Monique in which she used “photographic documentation, narrative texts, found imagery and personal iconography” (press release) to tell the story of the disappeared. Like any of Calle’s projects, Rachel, Monique keeps evolving. The last adaptation, Absence, is the first version in English.

In this show, Calle does not show the video of her mother's last instants. The viewer is welcomed to the gallery by a letter the artist wrote to Daniel Buren – a French conceptual artist – explaining her reluctance to expose such a personal artwork in a commercial space. This prelude gives the spectator a curiosity to pass the lace veils that obscure the entrance of the main gallery space. On the left wall is displayed a story of how the artist followed the instructions of a fortuneteller to do a pilgrimage to Lourdes, the city of catholic miraculous healings, while her mother was dying. Arranged to be read in front of the pictures and texts' recordings of Lourdes, an installation of marble signs on the floor lists diseases that were supposedly cured in the city; a list in which breast cancer cannot be found. On the center wall is an arrangement of mixed-media that works as a mausoleum for the artist’s mother: transcriptions of a page from her mother's diary are alongside a list of all the "lasts" the artist’s mother accomplished (last pedicure, last party, and so on until the last breath) and different pictures. On the right wall is an explanation and short movie of Calle’s trip to the North Pole, a journey her mother wanted to take and that the artist accomplished after her death as homage.

The display of the show can be read as the story of Calle’s exploration of her mother’s disease and death; a reflection on the mechanisms and the rituals we go through to accept a family member's loss. It is not surprising for an artist that has made an artwork of her life that mourning her mother would be staged in front of the public. No one can ignore the force brought by the interplay between images and text, something that might not be possible to express with mere words or pictures. Something that will touch the spectator's heart every time. The narration of the loss of a loved one is not the only story to Absence. An adjacent room displays the work Purloined that investigates artworks stolen in the 1990s and subsequently found; all are represented by a picture of their exhibition space, except for one work by Lucian Freud that wasn't retrieved, which is represented by the drawer that used to keep it safe when not on view. Next to the pictures are transcriptions of curators or museum guards’ vision on the loss of the pictures. 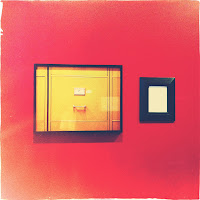 By traversing the exhibition the viewer is confronted with Calle’s emotions around the recurring themes of absence and disappearance. Both rooms offer a story of loss and mourning, both rooms also offer closure and give the spectator a feeling of accomplishment, a sort of catharsis. But the biggest absence of the show remains unsolved: what about the video of the artist's mother's last moments, Pas Pu Saisir la Mort, the enigma of the whole project? A tenacious spectator will discover that the video will be shown at the Episcopal Church of the Heavenly Rest, Manhattan, in May 2014.
Posted by Sara Bhasin at 9:12 PM