Wangechi Mutu’s survey exhibition A Fantastic Journey at the Brooklyn Museum delivers her characteristic themes of gender, race and over-consumption as well as the seductive watercolors and mixed media techniques that we have come to recognize as her own style. The exhibition mostly lives up to high expectations, however the most successful and satisfying parts of the show are still the familiar large-format trademark collages from the early 2000’s. The more recent work and the ventures into other media seemed awkward, and while not lacking in stirring visuals, they did not communicate with the viewer in the same effective manner as the collages. 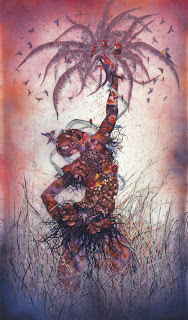 The various works are united by way of theme, though, and Mutu repositions herself within the contemporary art discussion of the politicization and allure of the female. Like Kara Walker, Mutu’s figures are exaggerated and based in racial stereotypes; both are reminiscent of the issues that have plagued women for centuries, exemplified in Sarah Baartman, the Hottentot Venus from the early 1800's. The viewer gets a vague feeling of having been complicit in this history and objectification, and we question not only history's role but also our own. This feeling does not come from any one work that is over-the-top prescriptive, but instead it’s a general cloud that hangs over the show. It is a disturbing and guilt-stirring sensation depending on audience, but it’s in no way repulsive and is actually quite attractive. The viewer is confronted with darker themes yet rewarded for investigating them; he or she has been lured in by their attraction to the figure as a figure (especially in Root of All Eves and Riding Death in My Sleep), but also by the seductive watercolors, bright papers, and soft materials that Mutu manipulates. 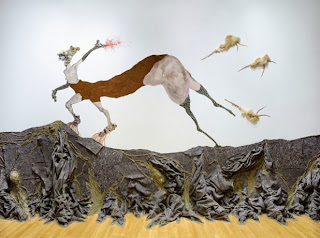 Mutu's pools of colored inks on mylar create a beautiful and tactile experience. She is able to incorporate paper in a way that is not disturbing to the image and blends fluidly with the ink. This is noticeable in the larger collages like Le Noble Savage (2006) because of the gesture and motion present. Perhaps this is why the new video work, which was commissioned for this exhibition, does not translate as vividly. The characteristic motif of a strange, threatening hybrid female is present in the video The End of Eating Everything, and its message ties in to the other wall-based works, but it is removed from the audience and the luscious surface is lost, thus letting go of a lot of the aforementioned meaning. The installation Splendid Play Time is harder to decipher, though it references mass consumer culture via the trash bags. The space that Mutu creates may make one more willing to engage with it, but it is still rather impenetrable. The format of multiple, small gathered black bags hanging at various lengths from the ceiling just above the floor is common and lackluster.
Mutu’s work encompasses an enormous amount of information on many interconnected ideas about pop culture, transformation, and colonialism. This world is specific to her but also very much relatable and significant in today’s culture. The exhibition does not fail to grab our attention regardless of media, and successfully relies on our willingness to participate and understand a bit more of our historical and contemporary roles in the changing landscape of gender and race.
Posted by JES at 8:22 PM