Peter Schumann at the Queens Museum

One of the first exhibitions in the new space at the Queens Museum is Peter Schumann’s show The Shatterer. The founder of the Bread and Puppet Theater (in 1963) in Lower East Side,Schumann emigrated from Germany to New York in the age of 27 to escape the cold war in Nazi Germany. His practice was since highly influenced by the politics: his large-scale puppets were used as in demonstrations against the Vietnam War in New York City, Washington DC, and other cities in and outside of the U.S. With this site-specific installation he follows up 50 years of de- and reconstructions within his own practice as well as allegorical to how he sees the role as an artist and with it the responsibility in our society.

With two large scale installations, Schumann alters the rooms to a black and white landscape of figures in different shapes, sizes, and mediums. Oversized paper-mâché  puppets (he calls them 2 or 2.5 dimensional “Hampelmann”, from German: puppet), cover the walls in horizontal, diagonal and vertical directions, sculptures with branches arranged like families shelter each other, and paintings with figures and text. Suggesting a political correct equal rights, but ironical class differences statement, figures dominate the first, lightly chaotic room. The German word “Hampelmann” has a double meaning, it is the name for the puppet toy, but it also symbolizes a weak, will-less man who is easy to manipulate. The giant masks, which are hanging from the ceiling, seem to demonstrate the power from above. The power of producing chaos and guiding man in different directions reminds of the babylonian goal to shatter the world. With the title, Schumann brings into question who “the shatterer” is today? 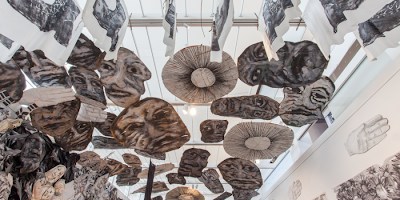 In the second installation, Schumann presents a potential order to the aforementioned chaos. With a monumental arrangement of the figures, along all four walls and multiple round fabric lamps in the middle of the room, that suggests a symbolic enlightenment as an order in the chaos. With a selection of his hundred handmade books of various sizes on view, the viewer is invited to read through the this library, in which each of them starts with the title “How to..”. New motifs fill the gaps between the figures to reach the top of the wall: Shoes, ladders and chairs. The symbolic and repetitive display starting from the chaotic bottom of the wall of hung little Hampelmänner, to the books that have humorous instructions to the different questions with a touch of disenchantment and going all the way up to the structured black and white drawings that resemble religious relics, the artist creates a spectacle that reminds us of a temple. One representative example of a book is the one titled “How to bake a bread?”. It includes drawings of a man sitting in front of the oven and thinking, until he has an idea that then needs to be shaped and baked. A metaphor that, to all intents and purposes, makes the viewers reflect about themselves and their responsibility to our society. Schumann works solely with cheap materials like cardboard, recycled paper, house paint and fabric. This approach supports not only his  Manifesto of Cheap Art from 1984 that claims for “Art wakes up sleepers!”, but also the idea of bare-essential production values. 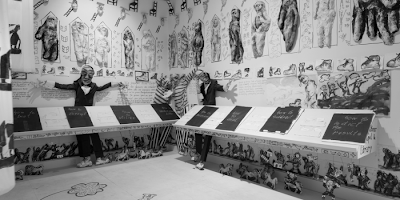 With this challenging exhibition that addresses everybody in his own context, Schumann creates an outstanding environment about the individual role in society, and reflects the escape from chaos into a visionary world. Apparently to be shattered offers the possibility of creating new dimensions and visions.