Agnieszka Kurant's exhibition exformation doesn't exist. Or, rather, it displays a variety of cultural artifacts that don't exist. Kurant's show, which involves sound art, film, cartography and sculpture, draws attention to the phantom elements of human life: things that were forgotten or exist only within the human imagination. The exhibition consists of maps of islands that nobody can find, broadcasts of sounds that nobody can hear, books that have never been written, artworks that were never executed, and a film featuring characters that were never included in famous movies.

The piece Map of Phantom Islands appears to be a normal map, but upon closer inspection, it is actually a map of the world with the existing landmasses edited out and replaced with “phantom” ones. These phantom lands include mythological places (such as Atlantis and Lemuria) and islands that were sighted and charted by navigators during the age of exploration but never seen again. An atlas of these islands, with stories of their various origins, is presented alongside the maps. In a world stripped bare by satellite imaging and Google Maps, the prospect of unexplored territories that have never been (and can never be) charted and conquered is an alluring one. Kurant presents these lands as if they have already been claimed and mapped and deprived of their sense of mystery. 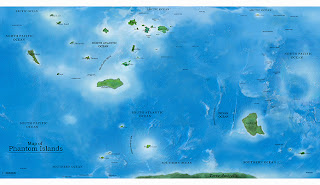 Kurant's sound installation, titled 103.1 (title variable), consists of a reel-to-reel tape recorder that broadcasts a shortwave radio signal to an antenna placed a few feet away. The tape consists of famous speeches from history since the advent of audio recording with the actual vocal content edited out: only the pauses and moments of silence and the hiss of magnetic tape remain. The signal is further degraded through its transmutation into a radio signal. Even though the transmission only travels a few feet and never leaves the walls of the gallery space, the result sounds like it could have traveled halfway around the world to reach the listener. The use of shortwave radio may serve to reference hidden and clandestine activities, as shortwave remains to this day a method of communication between spies and their handlers, usually in the form of mysterious “numbers stations” that broadcast coded messages across the globe. The resulting experience is the aural equivalent of reading a book with all the words removed, and only punctuation and white space remaining.


The show's most ambitious piece is a film titled Cutaways installed in a nearly hidden back room in a corner of the gallery space. The film features actors who played roles in famous movies but had their characters cut out of the films's final prints. These actors were asked to play their original characters (who have aged considerably since the original films were released) in a new narrative that unites these “cutaways” in a car junkyard. Once the story is finished, the credits roll: the credits are significantly longer than the movie itself and consist of an exhausting list of lost roles and their actors from throughout the history of cinema. Perhaps their roles were cut out of this film as well? Overall, exformation gives form to elements of human culture that would otherwise exist only as thoughts or memories. By charting lost islands and filming lost characters, Kurant summons them into the world of our experience, if only for a momentary peek at what they could have been.
Posted by Kalinova at 8:07 PM